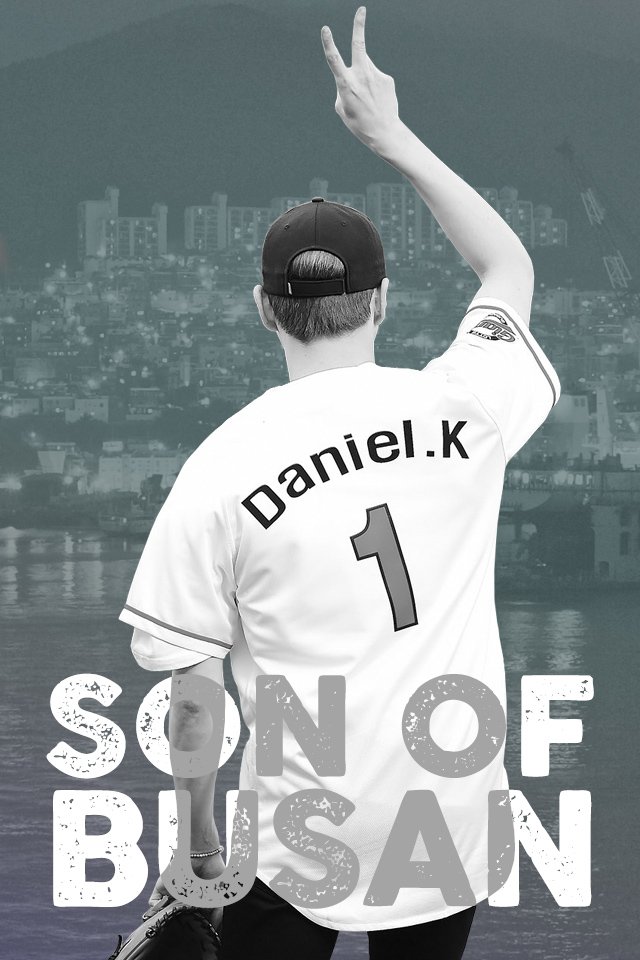 Ever since he first came to light at the beginning of Produce 101 Season 2, Kang Daniel has been known as a native of Busan. In fact, his personal message for the National Producers as stated above, conveys his pride towards his hometown and his identity as a Busan man. Two years later, everything comes full circle as he is officially appointed as a Busan City public relations ambassador, an honor bestowed to him by the city that he is so proud of. In this part, we will look back at several moments of Busan’s prominence in his life as we follow the story of mutual affinity between Kang Daniel and his hometown.

The beginning dated back as far as the early days of Produce 101 Season 2. As soon as Daniel’s profile was published on the show’s website, fans immediately learned that Daniel is a Busan native through his personal message. Throughout the run of the show, he was also often asked to speak in the Busan dialect (satoori), further linking him to his hometown city. This association also slowly grew in the hearts of Busan citizens. As Daniel rose to victory, his achievement was acknowledged and celebrated by Busan citizens in various ways.

The earliest and the most prominent acknowledgements so far come from the media. In a news article from December 2017, Daniel’s name was mentioned among the top 20 leading products from Busan, alongside the likes of Busan International Film Festival’s VR Cinema Theater, Movie Experience Museum, Busan National University AI Doctor, and Marvel Experience Busan.[s] In 2018, the fact that Daniel comes from Yeongdo district in Busan was mentioned in KBS News and also on Episode 9 of tvN’s Encyclopedia of Useless Facts 3, where the cast of the show was tasked to find the representative character of West Busan. In that episode, the cast members sought to find traces of Daniel in Yeongdo after they came to an agreement that Daniel is the most suitable representative character of West Busan. In February 2019, JTBC Good Day Today mentioned that Yeongdo is recognized as the filming site for the film The Attorney (2013), but nowadays it is known for being Daniel’s hometown. The fact that Yeongdo area is the birthplace of Daniel was once again reiterated in an economic news article published by NSP on May 29, 2019.[s]

The close association of Daniel and Yeongdo has also contributed to increased tourism in the area. When Yeongdo and Heundae were promoted as May 2019 domestic travel recommendations, it was specifically mentioned that Daniel was born in Yeongdo.[s] MBC promoted the district in a show titled “The Niel Tour” aired on March 7, 2019, where they visited the district and places which hold significant personal meaning to Daniel, such as his former middle school, the flower shop where he bought flowers for his mother, and his recommended restaurant. Busan Tourism Organization also launched the “Kang Daniel Hometown Yeongdo Tour” on July 4, 2019, visiting many scenic spots picked by Daniel himself. This includes Korea’s very own version of Santorini, the breathtaking Huinnyeoul Culture Village, as well as his former middle school and the small restaurant in front of it, where tour participants can find Daniel’s personal signature.[s]

Daniel himself is also actively involved in promoting local events held in his hometown. One of such events is Busan One Asia Festival, an annual music and cultural festival held at Busan intended to share the Korean Wave with youth around the world. Aside from performing in the festival with Wanna One, Daniel also showed his support by serving as one of the festival’s opening ceremony presenters for two consecutive years in 2017 and 2018. Being a Busan native, his role as the opening ceremony presenter is considered as a representation of the city itself. 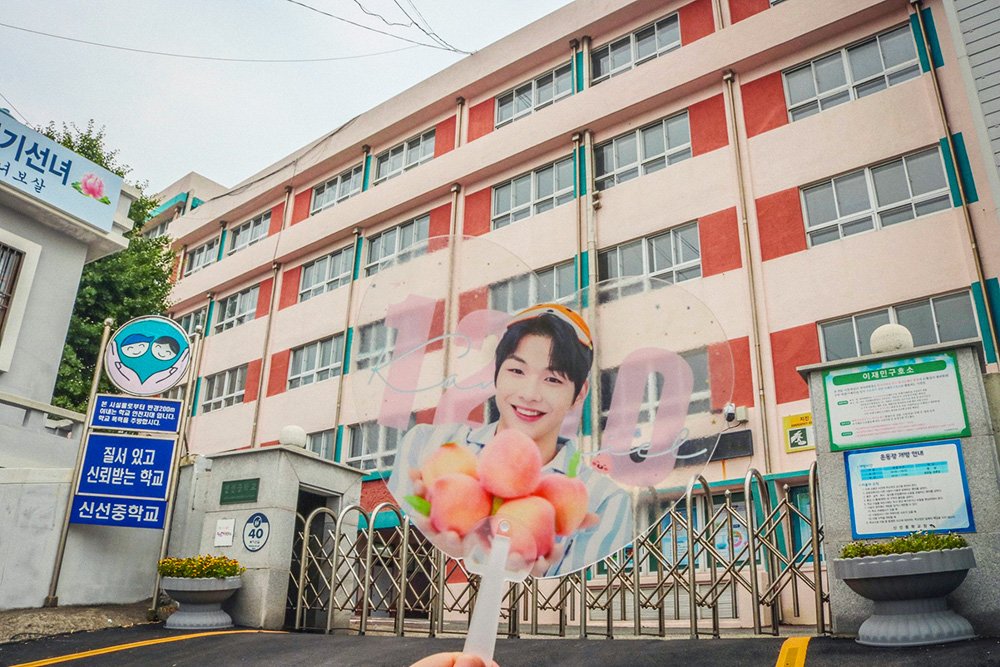 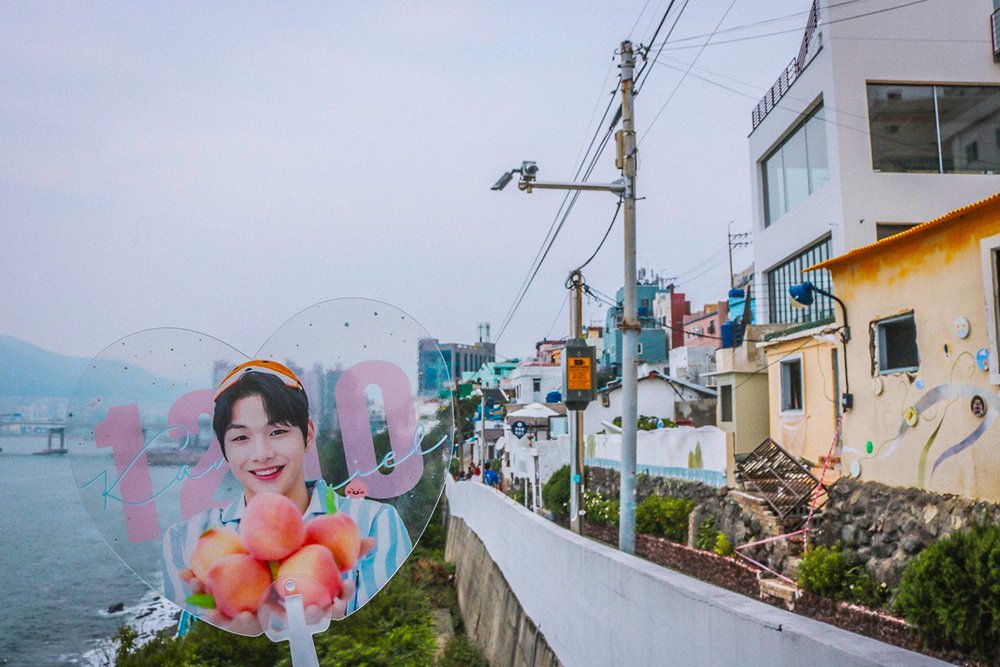 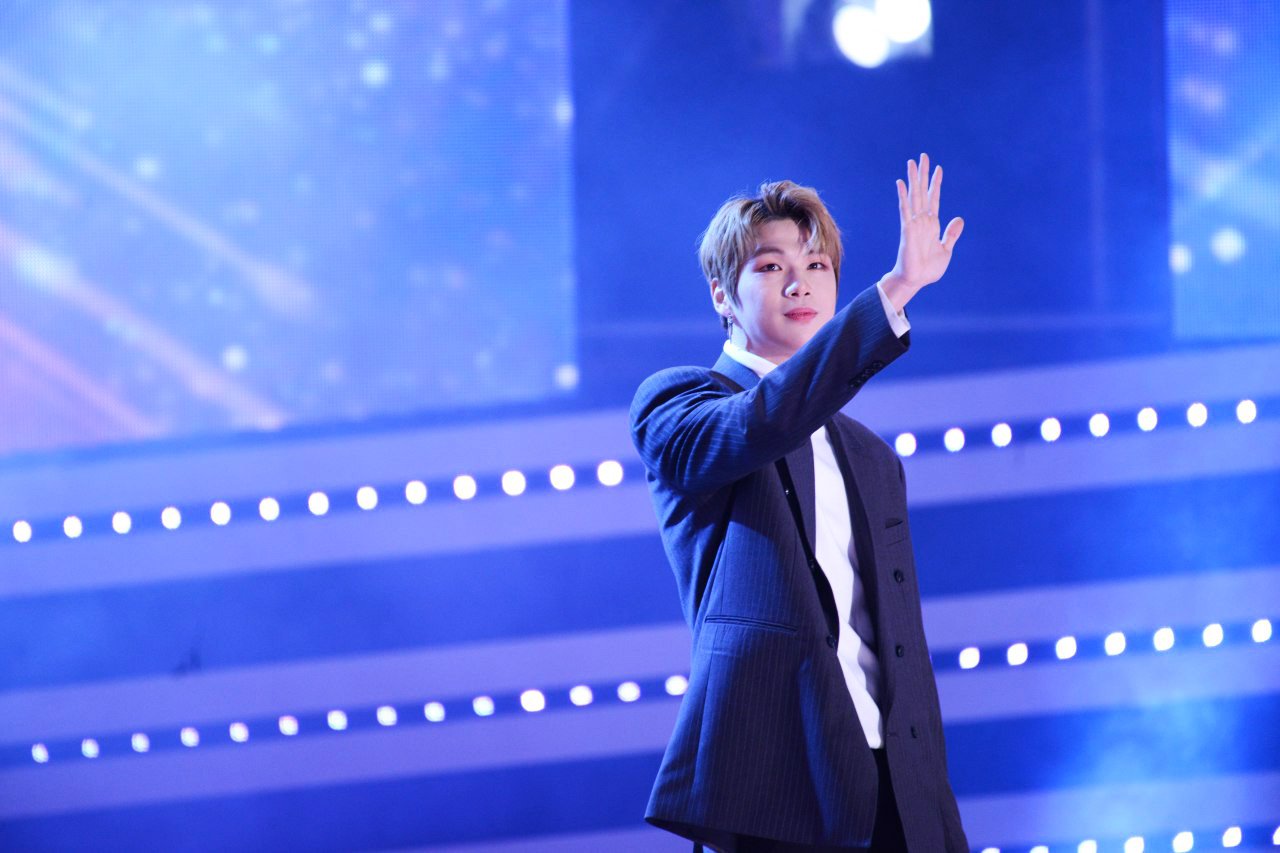 The highest honor ever received by Daniel from his hometown is without a doubt his appointment as a Busan City public relations ambassador. Daniel was selected through an event held by the city of Busan in April 2019 asking its citizens to recommend a celebrity that they think is most fitting to promote the city. A total of 2,037 nominees who were all homegrown talents from the city were considered. At the end of the recommendation period, Daniel was one of three public figures hailing from the city selected.[s]

On June 12, 2019, it was revealed that Daniel had given his consent to assume the honorary ambassadorship role and would actively and voluntarily promote the city through various public activities. It was also reported that the official appointment ceremony was scheduled for July 2019. Responding to this honor, Daniel commented through his agency, “I’ve always wanted to do something for Busan, the city I was born and raised in. I’m glad and feel a sense of responsibility to be named as [the city’s] promotional ambassador. Even though [Busan] is already a great city, I will try my best to be even a little bit of help for it to grow into becoming a better city.”[s] [soompi]

Further details regarding the official appointment ceremony was revealed on July 3, 2019. The date and venue for the ceremony were set for July 9 at Busan Sajik Baseball Stadium, the home stadium of the Lotte Giants team. In addition to receiving the official letter of appointment and plaque from Busan’s mayor Oh Geodon, Daniel also received the honor of throwing the first pitch at a KBO League baseball match between the Lotte Giants and NC Dinos. The live broadcast of the entire ceremony was provided by Busan City and Busan Tourism Organization through their official Facebook and YouTube accounts. The news came as a sweet surprise because in 2018 Daniel confided in a V LIVE that he wanted to perform the ceremonial first pitch for his hometown team Lotte Giants at Busan Sajik Baseball Stadium, and it eventually turned into reality exactly one year later. The fans’ reaction to the news was overwhelming, as the event would also mark Daniel’s first public appearance after his long hiatus. Tickets for the match scheduled for the ceremony date also became hot items, and the Lotte Giants website went down due to too many people trying to access its online ticketing system.

On the day of the ceremony, Busan Sajik Baseball Stadium became a witness of Daniel’s appointment to his new honorable role as well as his immense popularity worldwide. Two hashtags related to the event, #부산의아들_강다니엘 (‘Son of Busan’ Kang Daniel) and #BusanAmbassadorDanielK, trended worldwide for several hours and even reached the top position on Twitter. A surge of 15,651 baseball game spectators, nearly three times the normal attendance number on weekdays, made the match the most watched KBO League match that day.[s] The three biggest television stations in South Korea, SBS, KBS, and MBC, all reported about the event on their news programs. An astounding number of nearly 600 articles were written and published on Naver regarding the event. The live coverage of the event, streamed on Busan City and Busan Tourism Organization social accounts, also received a lot of attention with more than 30,000 people streaming in real time. In respect of the event, an official from Busan City said, “It was an event that reflected the popularity of Kang Daniel. We’ll continue to carry out various promotional activities with him. We are deeply grateful to Mr. Kang Daniel for accepting to be a Busan PR Ambassador and to his fans for showing a lot of interest.”[s] 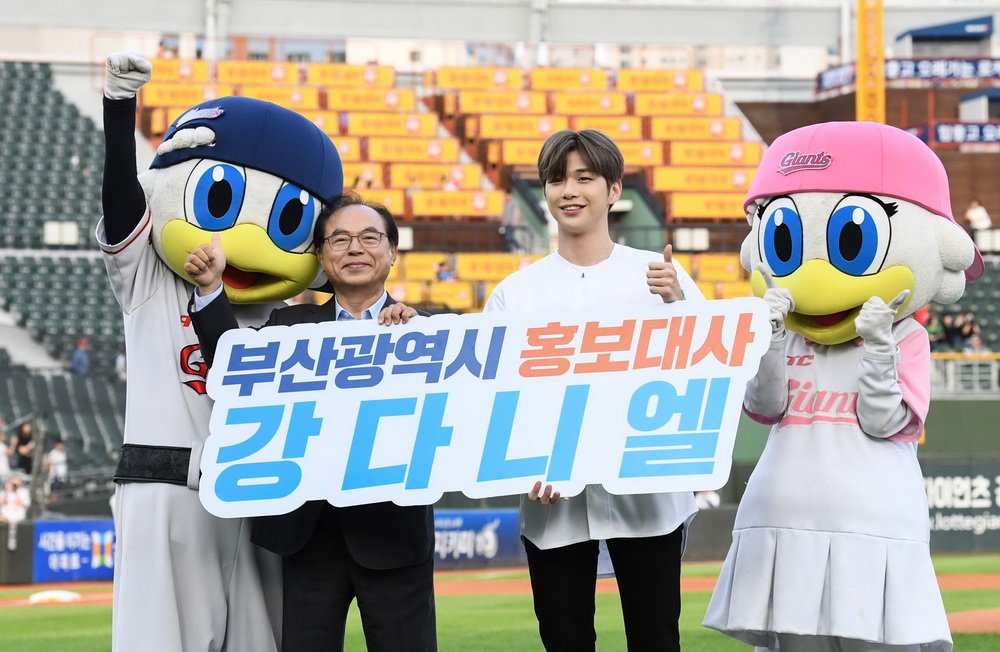 To complete the happiness on that day, hometown team Lotte Giants’ surprise victory with the final score of 1 – 4. After a series of consecutive losses in the last 6 games, Lotte Giants was the underdog for the match, and the victory came as an unexpected twist.[s] Daniel’s presence was hailed as a good luck charm among the celebrating fans, and he soon received the “Victory Fairy” moniker. It was the perfect way to portray the symbolic affinity between Daniel and Busan, as his first official day as the city’s ambassador was also a day that would be sweetly remembered as a day of victory celebration for the city. 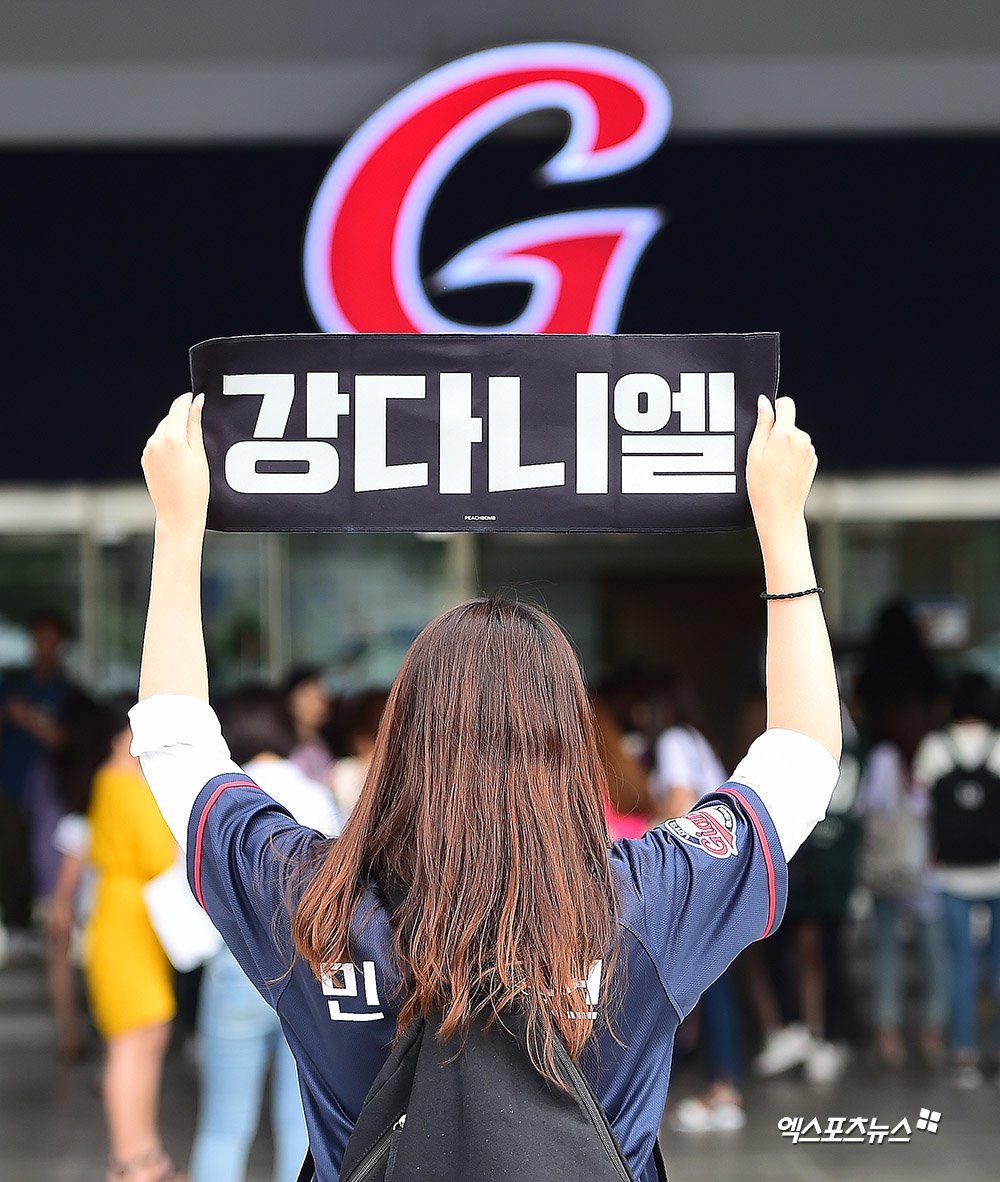 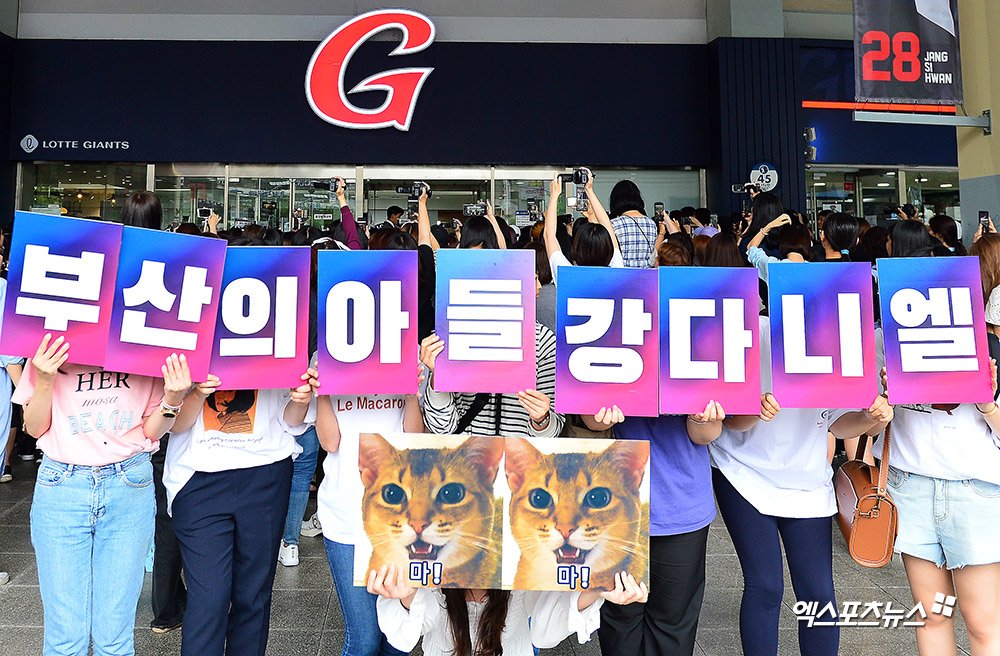 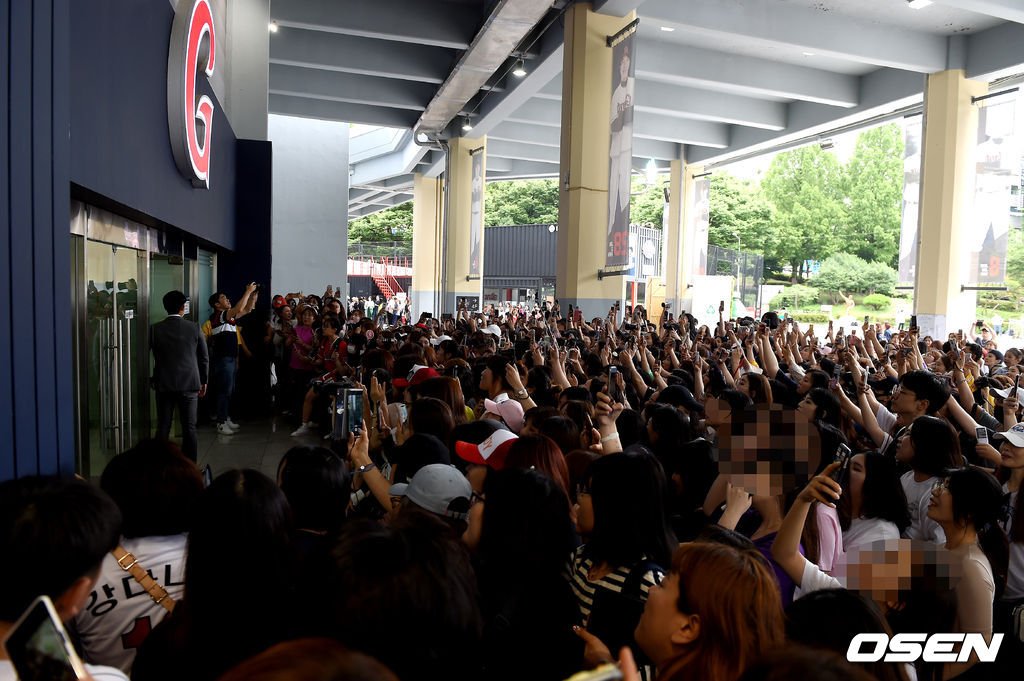 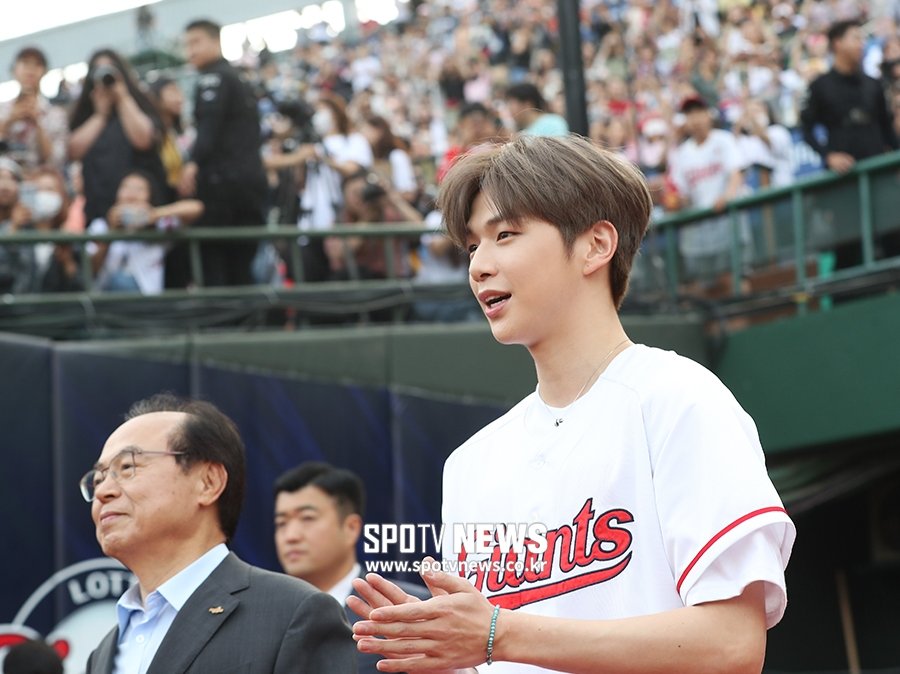 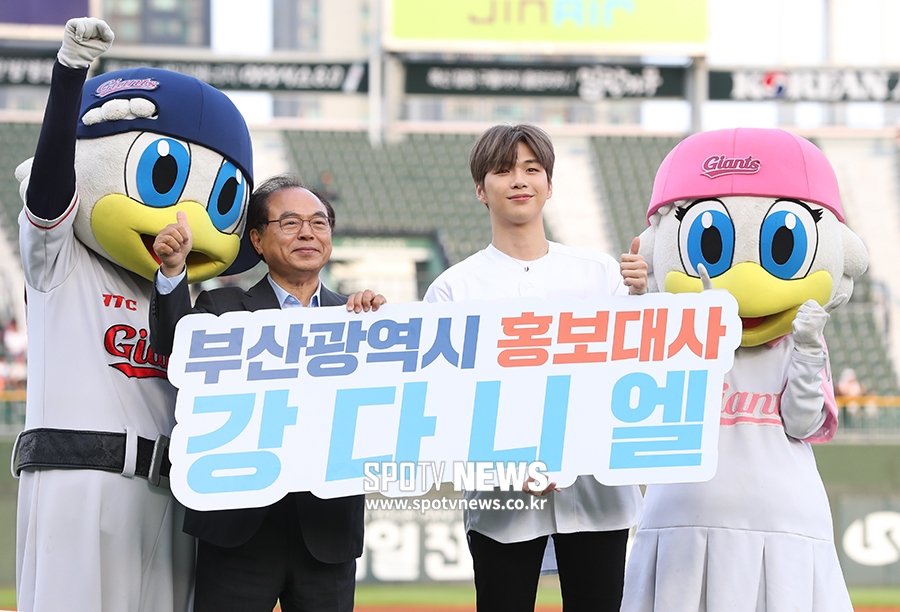 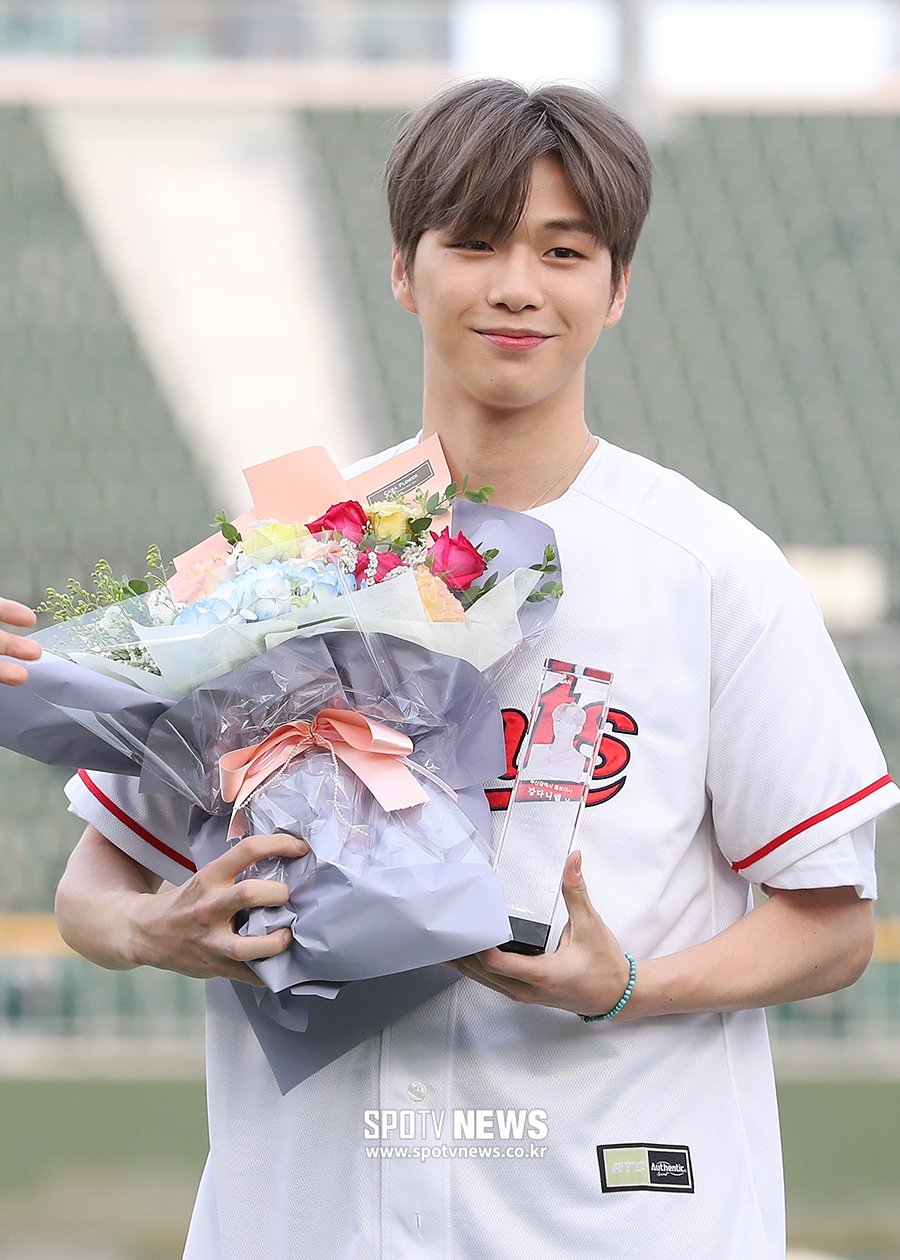 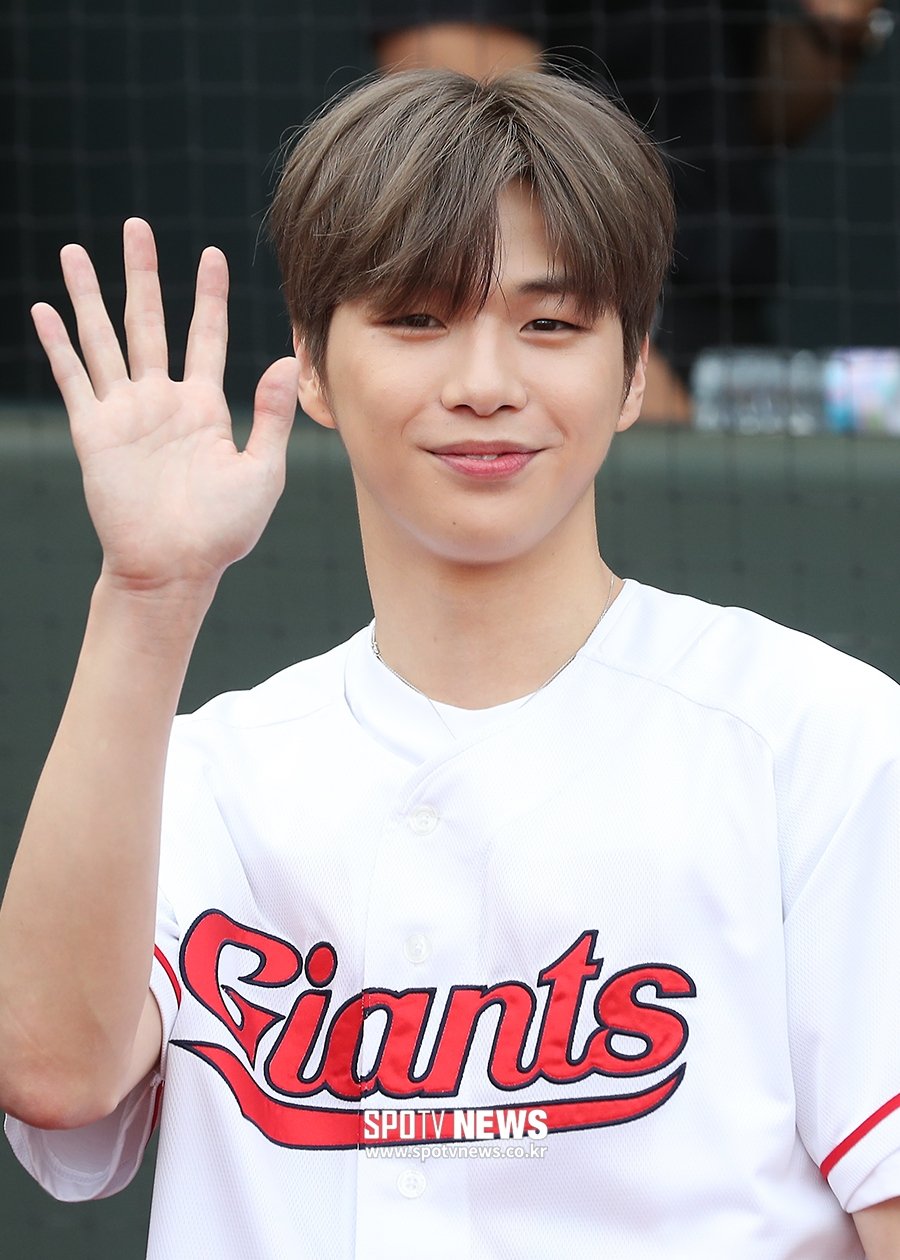 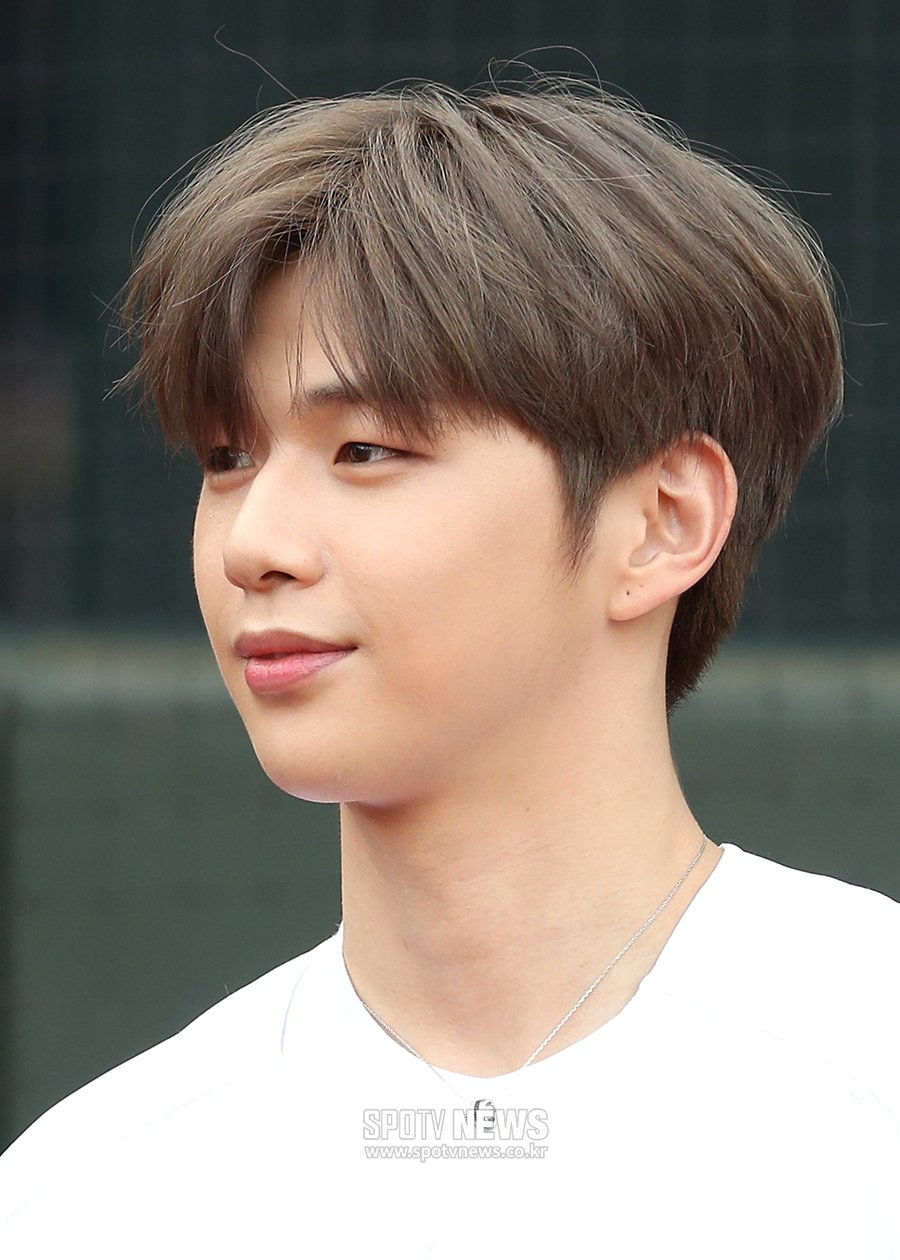 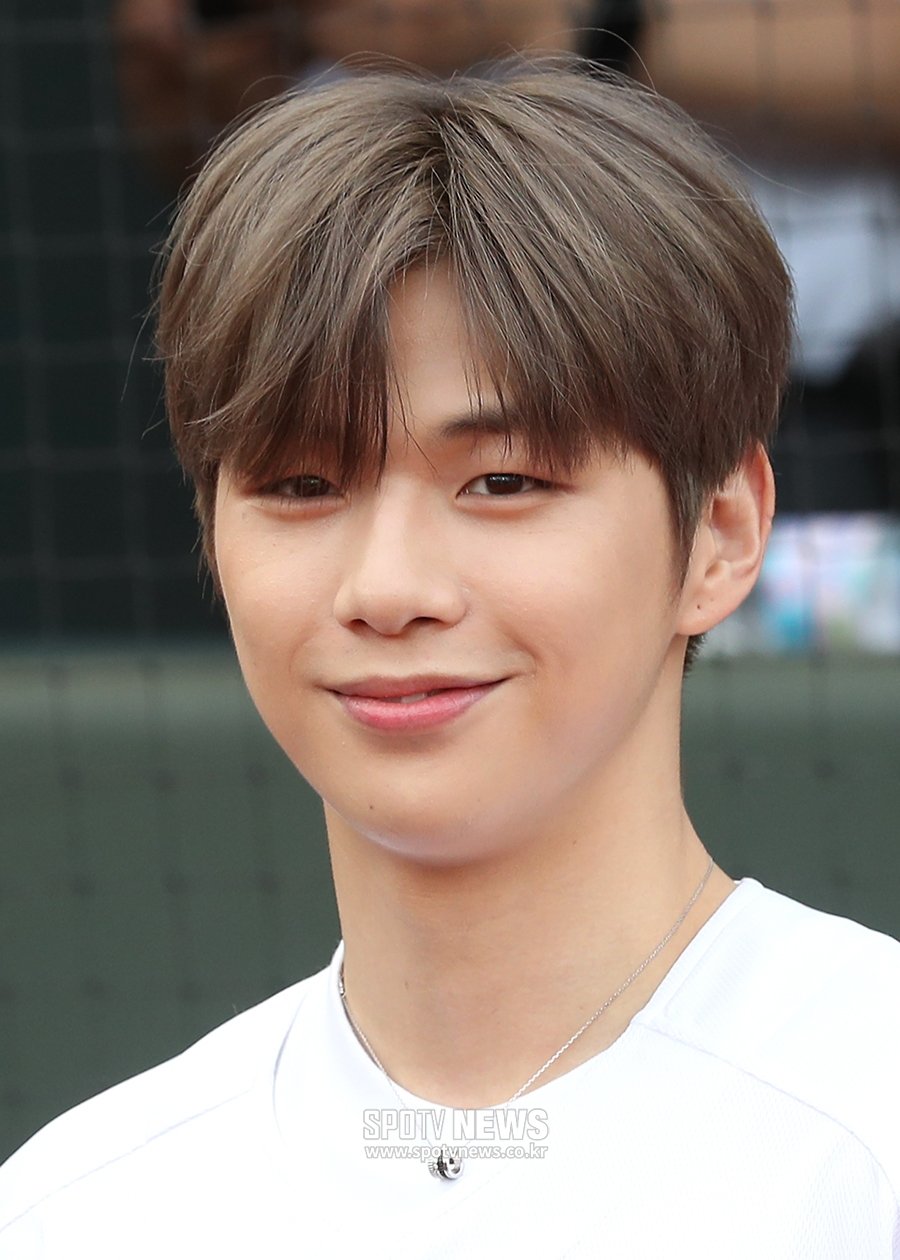 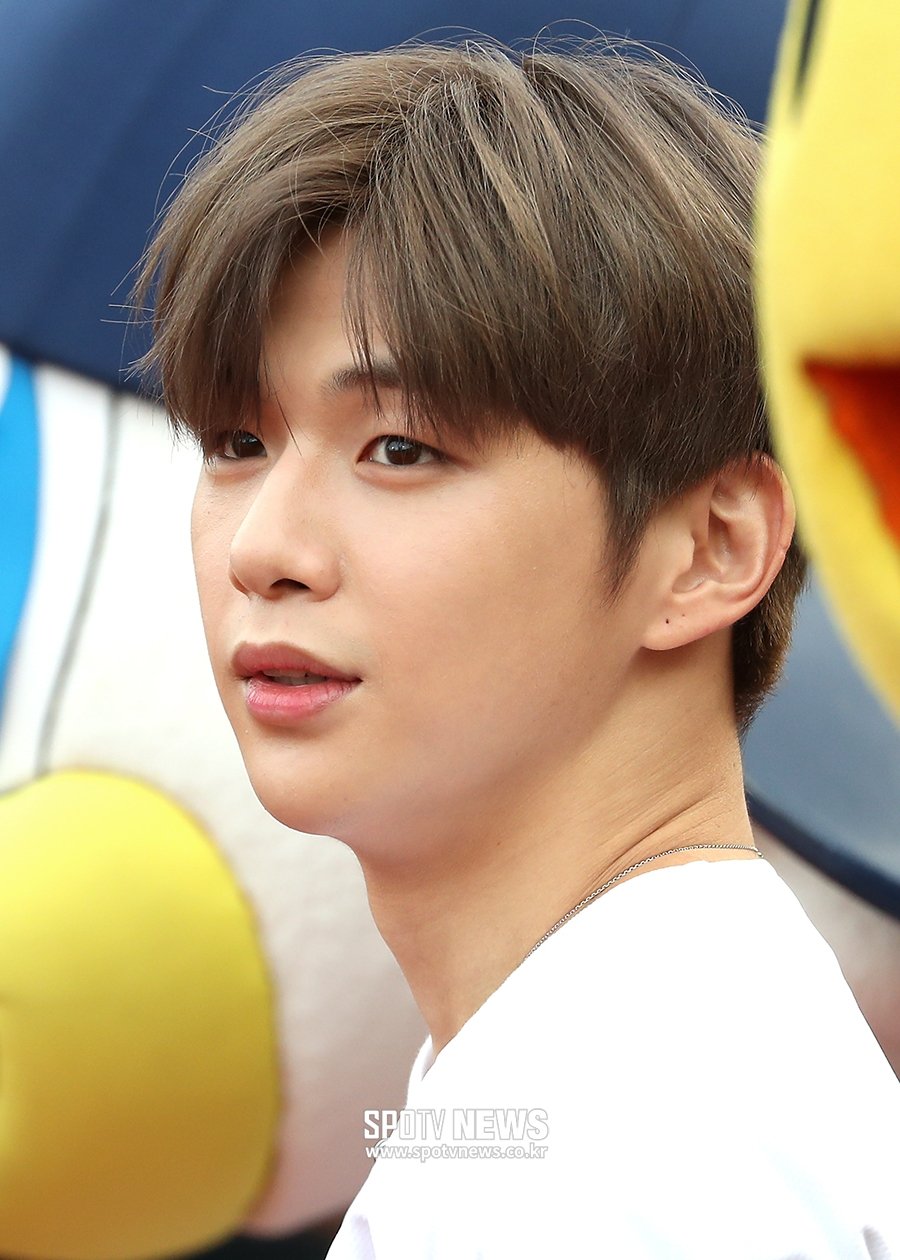 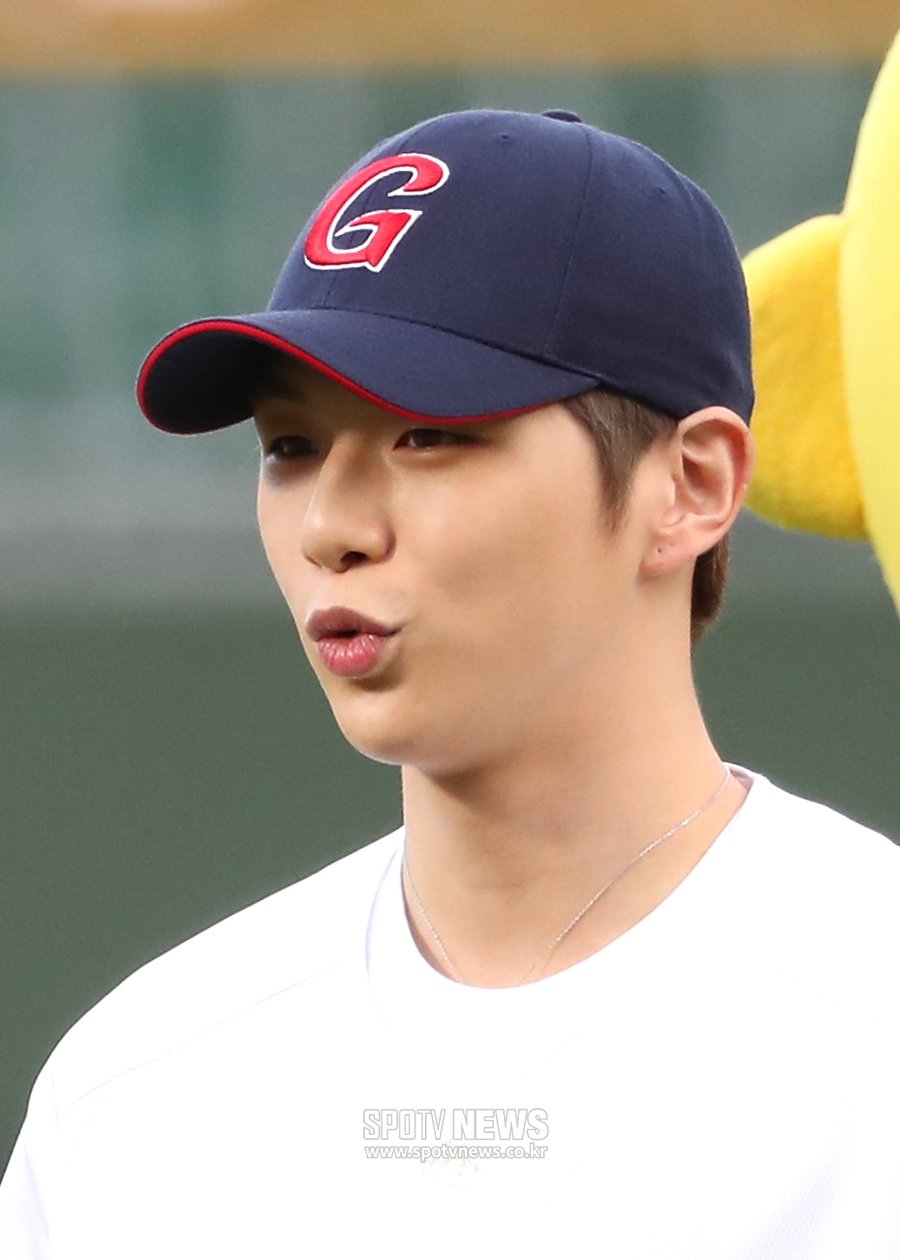 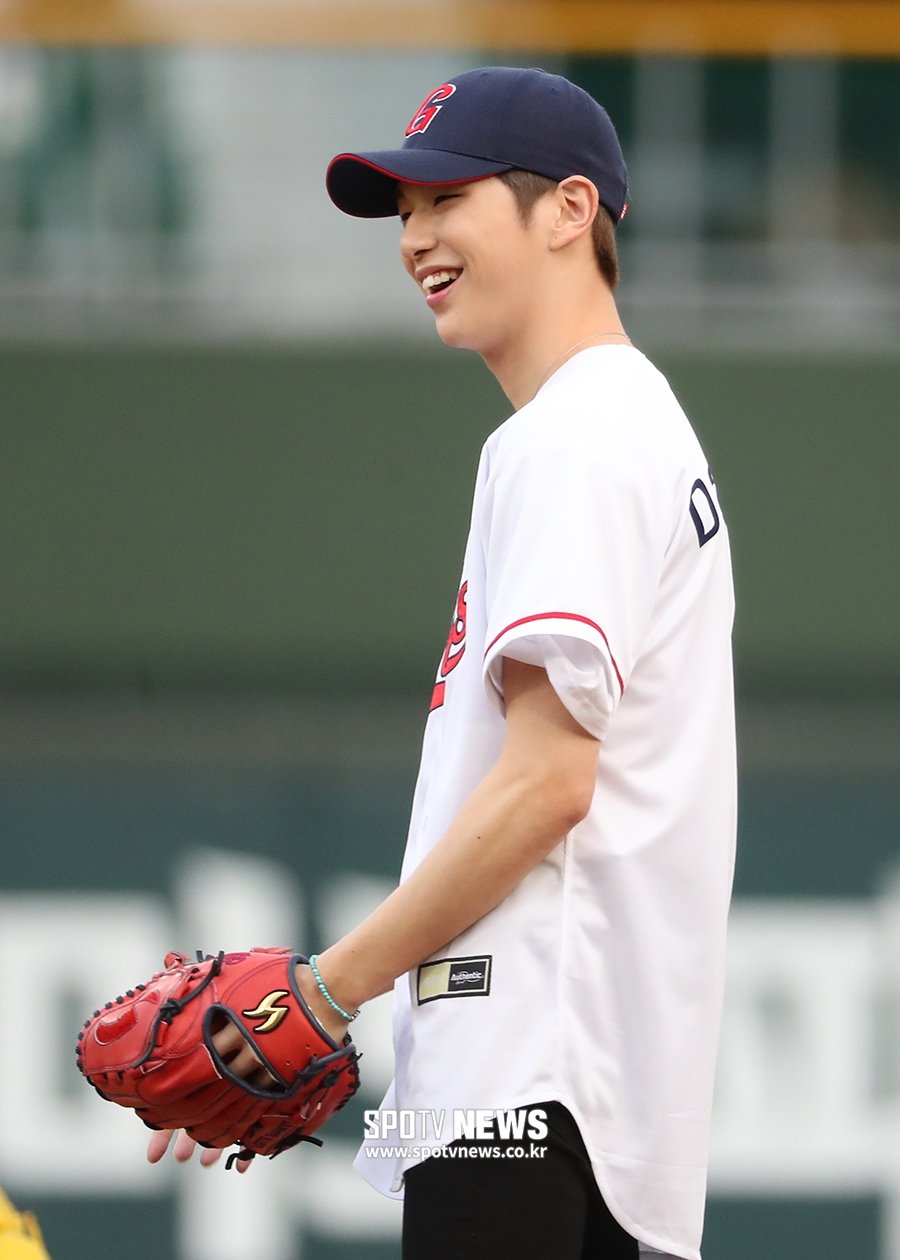 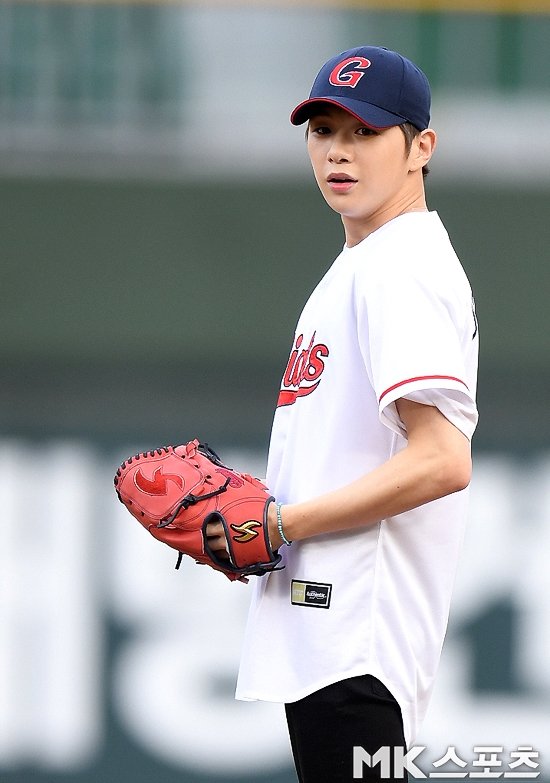 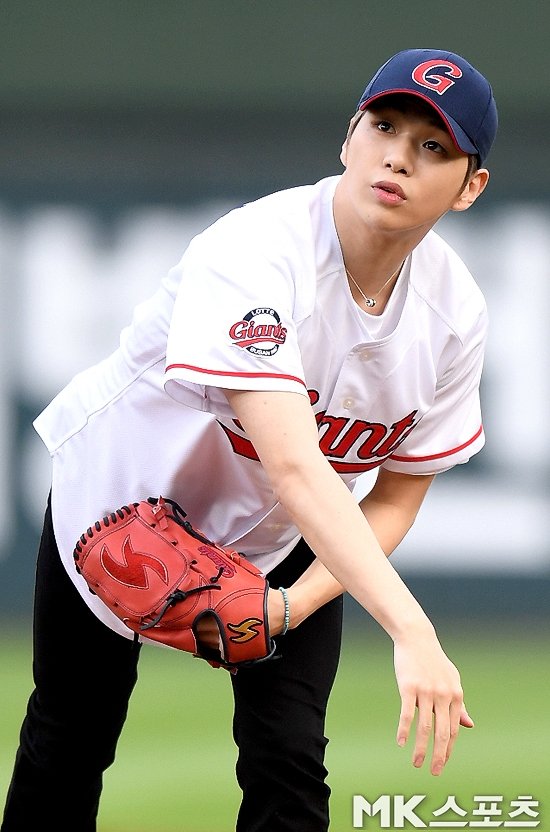 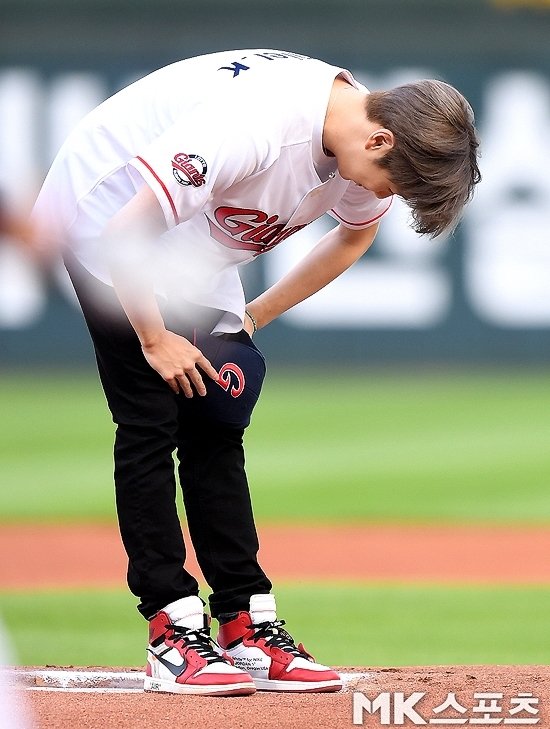