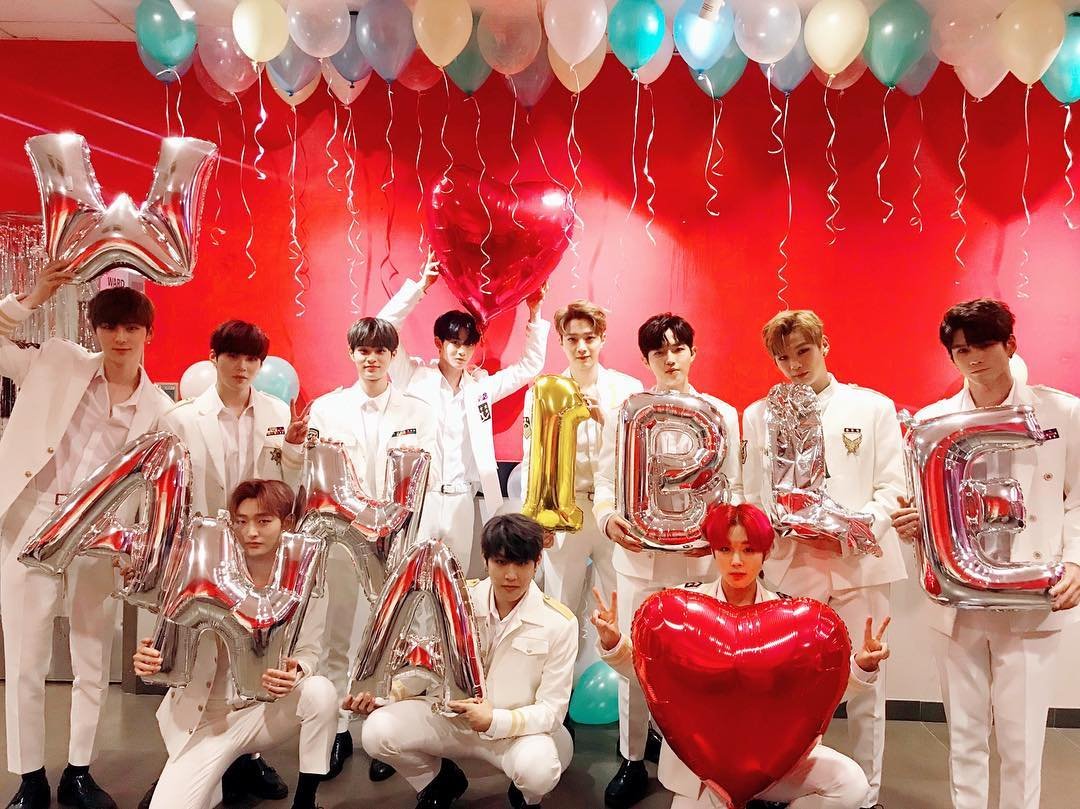 [OSEN=Reporter Jung Ji Won] Trend-leading group Wanna One recently appeared on OSEN’s V LIVE show Star Road. This is a show for only Hallyu fans in Vietnam, where Korean stars reveal their hidden charms. On the show, Wanna One will compete in games, and even the company’s parties and mini-interviews also will be revealed, bringing the audience Wanna One‘s true image. In the interview which was conducted recently with the Star Road program, Wanna One frankly expressed their desire to return to Vietnam after attending the MAMA Awards in 2017, the feelings of the group before their one year debut anniversary, the daily life of the members, etc. Here we will pre-release some parts of the group’s interview.

◆ August 7 will be the one year debut anniversary of Wanna One?

(Kang Daniel) I feel like this one year is just a dream. It’s Wannables who have given opportunities for me and other members so that we can experience things that go beyond my expectation. I’ve spent a year with many meaningful things in my life. If time allows, I want to contribute the best of myself as a member of Wanna One.

◆ Recently, which moment has made you feel “You are being admired”?

(Kang Daniel) I often visit the group’s official fancafe. Whenever we give a performance or attend an event, fans often post comments saying, “Wanna One has been working so hard.” I have never heard such words that much before, so when I read those lines, I am grateful to think that I am being loved so much. (You have struggled to give a good answer). Yes, thank you, haha.

◆ After Wanna One debuted, have you ever watched Produce 101 Season 2?

(Kang Daniel) Instead of watching the show, I often watch stages of performances. Then I thought, “My ability really has progressed a lot.” I did not even know how to look at the camera and did not know what the so-called “in-ear” was, so I often wore the headset contrariwise. Ha ha. It was probably the most tiring time of my life but very interesting. (Why were you tired?) I was up all three nights during the first time at the dorm.[s] [s]

August 07, 2018: Wanna One Reminisces and Thanks Fans for 1 Year Anniversary

To the question, “How do you want to be remembered by Wannables?” Kang Daniel shared, “Our first title was ‘The Group Born From The Nation’s Hands.’ I still want to show that [to everyone], ‘Your choice was the right choice.’”[s] 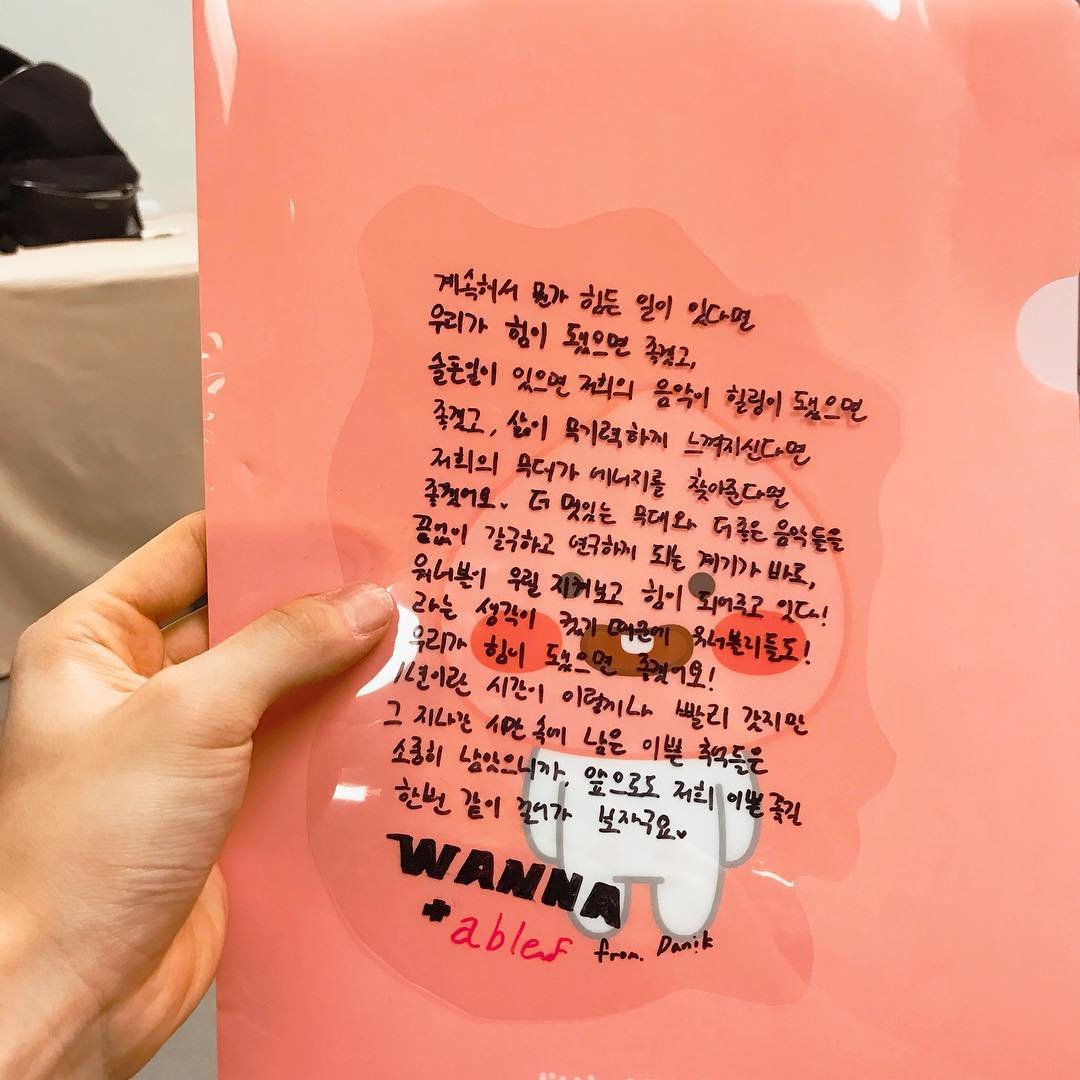 “Going forward, when you’re having a thought time, I hope we could become your strength.
When you are sad, I hope that our music would heal you.
When you feel your life is becoming fatigued, I hope that you would find the energy in our performances.

The motivation for me to improve and endlessly crave for cooler stages and better music is no other than the thought of Wannables watching over us and giving us strength!
Therefore, I hope that we would also become Wannables’ source of strength, hehe.
1 year flew by so quickly like this, but the precious thing is left behind among that time that had passed were pretty memories.

In the future, also, let’s try to walk the pretty flower path with us!!
While hoping for a beautiful time in the future, again, thank you so much for having become Wanna One’s fans, for cheering us on. I hope you would keep watching over us and supporting us on the road of Wanna One.

I will always also support Wannables!

Kang Daniel was recognized with the Male CF Model award for his brand power at the 2018 Brand of the Year Daesang.[s] [OurDaniel] 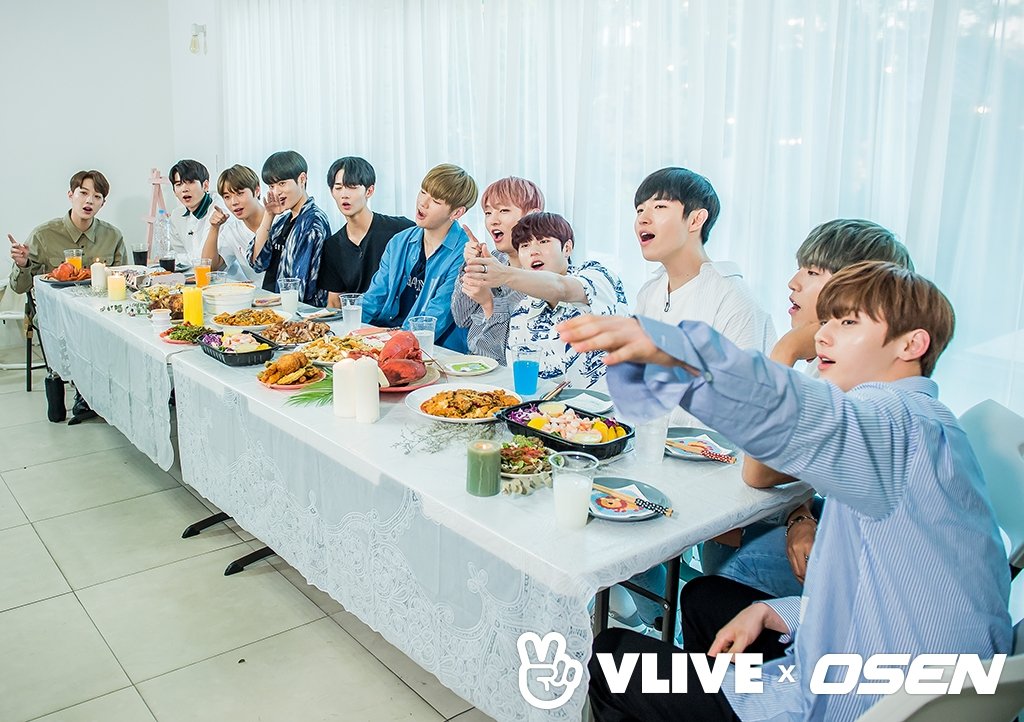 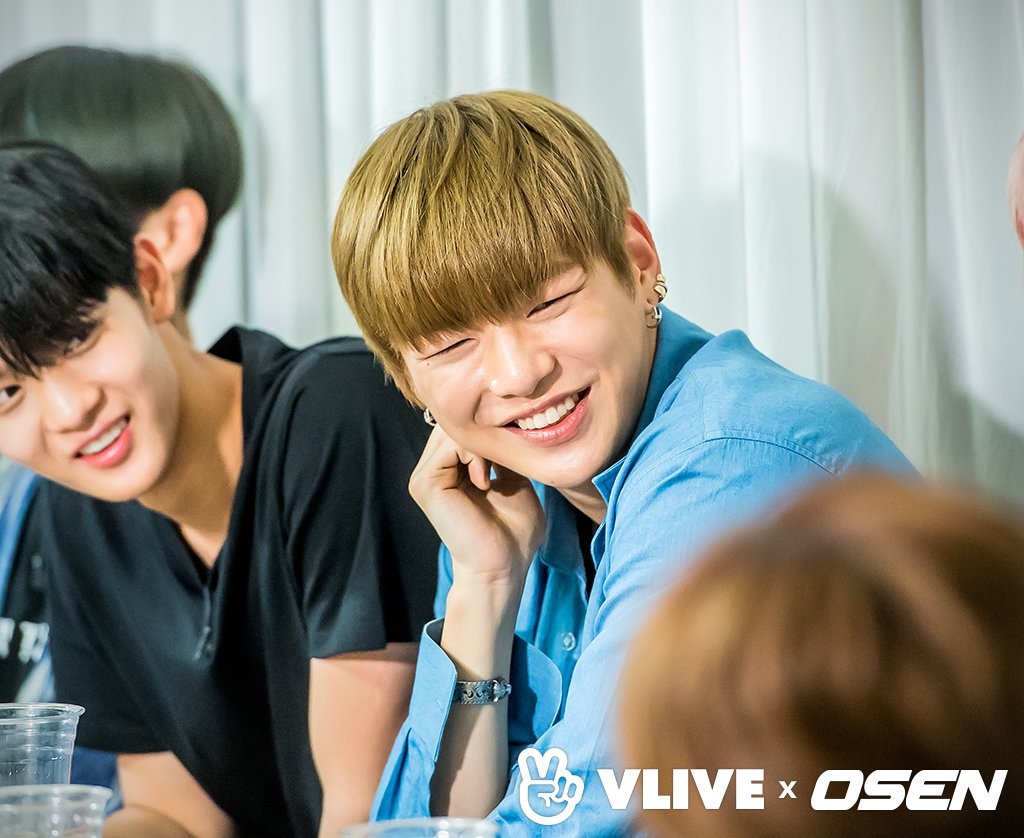 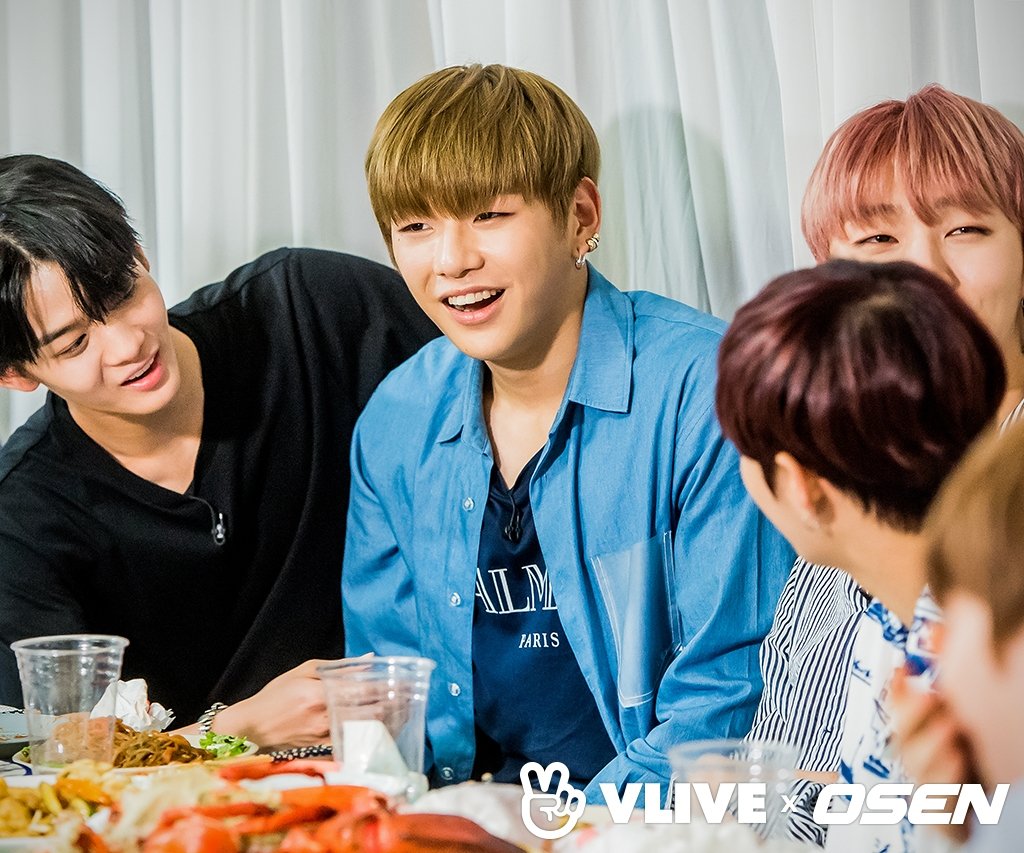 [OSEN = Reporter Jung Ji Won] The trend-leading group Wanna One appeared on OSEN’s V LIVE show Star Road, a show that brings hidden charms of Korean stars to fans of the Hallyu wave in Vietnam. Follow-up is the Q&A section for Wanna One.

(Kang Daniel) My head is quite round, so almost every hairstyle will match me. So I do not like any particular hairstyles. However, I like Jin Young’s 5:5 hairstyle. Whenever he cuts that hairstyle, I can feel the balance on both sides, and I really want to touch the top of his head.

(Kang Daniel) Game, shopping, sleeping. Different from Kuanlin, I want to go shopping directly. If I have free time when I work overseas, I usually go shopping.

◆ What do you want to improve recently?

(Kang Daniel) I want to improve my foreign language skills. I want to learn English, Chinese, and Japanese to be able to talk with fans in those countries in their own language. I’m still learning now.

◆ What is the moment that you feel Wanna One really form one?

(Kang Daniel) There will be about once a month when all 11 people will choose the same meal. At times like that, I think “We are one” and feel very happy. This is a moving question, but my answer doesn’t seem to be relevant. Haha. If we talk about other things, it’s when a concert ends. All 11 people say together, “Everyone has been working hard,” then hug and cheer each other up. I think those moments are wonderful.

(Kang Daniel, replying to Kuanlin) I think that Kuanlin is Korean already. Every time we finish a schedule, despite being tired, since we have the potato soup together, the weariness disappears.[s] [s] 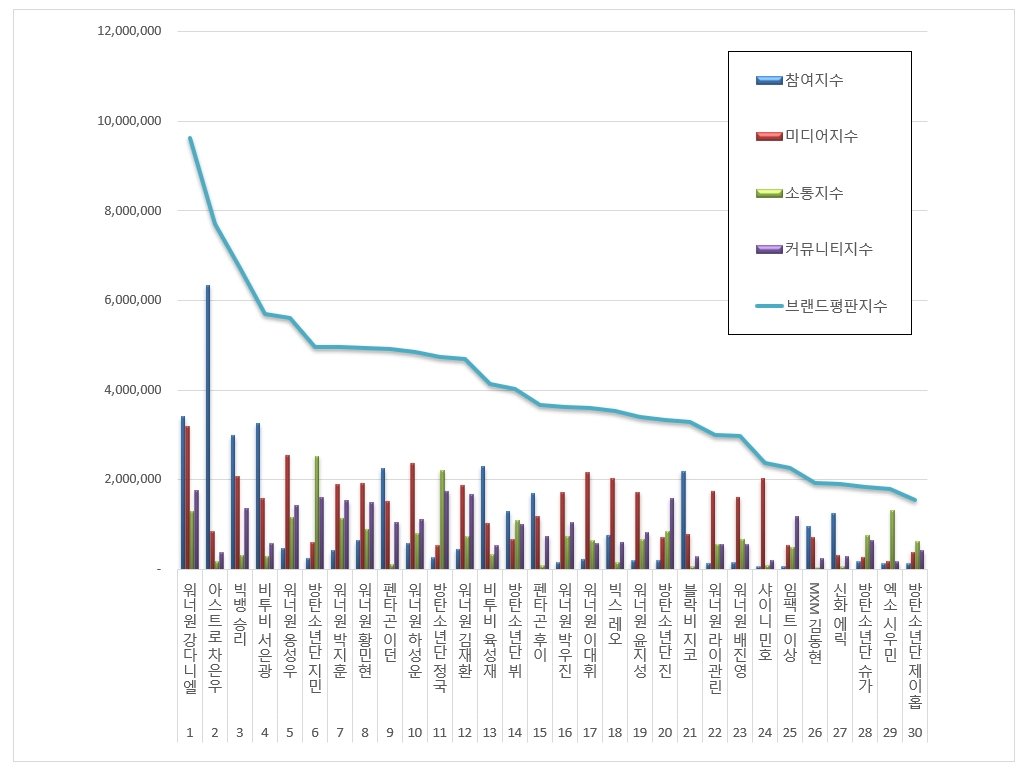 The analysis showed an increase of 3.62% with a brand reputation index of 9,637,088 collected from July 16 to August 17. His positivity-negativity analysis revealed a score of 85.10% positive reactions, which is the same as last month’s score.[s] [soompi]

[August 16] Excerpt from an interview with singer and composer Baek Chungkang, winner of MBC’s Star Audition Season 1 in 2011:

BCK: “Kang Daniel came out on Produce 101 Season 2. He is a friend (T/N: The word “friend” in this case was used as a friendlier way of saying “this person”) who has a lot of talent and seems to do everything well. He is doing great now, but I think he is going to do even better in the future. I don’t know much about other audition programs, but I saw Kang Daniel.”[s]

August 24, 2018: Wanna One’s Kang Daniel, the Charming Guy Who Invites Autumn to Come… Ranked #1 in “Stars of the Limit of Heat”

T/N: According to the Chinese 24 solar term system, there are 24 solar terms in a year that reflect the variation of natural phenomena, such as seasons, climates and phenology. Among them all, the Limit of Heat (Chinese: 處暑(处暑)) is said to be the most beautiful one. This is the second solar period of autumn after the Start of Autumn. The name means the heat has come to its limit, which is a sign of a soon decrease in temperature, and the weather will become cooler.

The member of Wanna One, Kang Daniel, has been ranked first in a poll called “Stars of the Limit of Heat – the charming guy who invites autumn to come.”

Particularly, Kang Daniel won with 300 votes (50%) in the poll “Male artists of the Limit of Heat – the man who calls autumn to come” made by a mathematics cyber academy for students from grade 1 to grade 12 called Sevenedu. They conducted the survey with 597 people from July 30th to August 22nd.

As a member of Wanna One, a project group formed last August from Mnet’s program Produce 101 Season 2, Kang Daniel has been attracting many fans due to his stable rap, deep voice, and as-accurate-as-drawing-a-thin-line dance moves. With a foundation in b-boying (as he had done it for such a long time) and his contemporary dance studies, his ability is recognized by the public. He himself was also called a whole-package idol even before his debut.

Currently, Kang Daniel has exclusively owned the first place in the brand reputation rankings for individual boy group members for more than one year straight. His popularity is once again confirmed when Kang Daniel showed his entertaining ability in various TV shows such as SBS’ Running Man and Happy Together 3, KBS2’s Superman Returns, MBC’s It’s Dangerous Beyond the Blankets, and so on. Moreover, he is also very active in doing advertisements for a number of different brands.

The name “Limit of Heat” was made with the idea of “the end of heat” in mind; it means a sign that the summer has come to an end, and the cool autumn is going to start.

On the other hand, Wanna One went to Melbourne for their 2018 World Tour on the 15th and just returned to Korea on August 20th.[pinkkangvn]

Wins 1st place for DCinside poll with 17,437 votes (53.2%), held from August 5 to 11, under the theme “Mukbang star that makes your appetite increase despite the hot weather?”[s]

Wins 1st place in the personal ranking poll of Click Star Wars, from August 13 to 20, with 971,265 votes in the third week of August, under the theme “Which celebrity do you want to go on a last summer vacation together with?”[s]

Wins 1st place in the personal ranking poll of Click Star Wars, from August 20 to 27, with 832,001 votes in the fourth week of August, under the theme “Which celebrity do you want to put makeup on by yourself?”[s]