“Demonstration of Power” Kang Daniel, What’s the Next Move for 2019?

The second project group Wanna One who was selected by national producers through Mnet’s Produce 101 Season 2 has ended their official activities, but the interest for the members is still hot. In particular, Kang Daniel (23), who was Wanna One’s center, is receiving the most interest regarding his solo activities.

Since debuting as Wanna One in August 2017, Kang Daniel has been at the center of receiving the most attention as a popular star. The center position was the highest honor given to the trainee who won the Produce 101 final contest. The position was proof of receiving the most number of national producers votes and added to the program’s fervor by verifying it had chosen the hottest star.

Kang Daniel also did great as the main dancer and lead rapper of Wanna One with a uniquely deep voice. On JTBC’s Knowing Bros, he showed powerful and charismatic b-boying dance moves that come out of his tall height, which is a separate weapon he’s had prior to the “star” power he gained during Produce 101 Season 2.

The enthusiasm and sincerity Kang Daniel showed on the show shined even brighter during Wanna One activities. As an artist who already had powerful musical potential coupled with “Mungmoongmi” (puppy-like appeal) looks and gaining solo presence/experience as the center, Kang Daniel’s brand worth consistently went up. Therefore, he received a lot of love calls from other industries outside of his music activities. When all the Wanna One members could not be included in a TV show schedule, the subunit of Wanna One that went on these always included Kang Daniel. He also became a “sold out” issue for the endorsements he did alone due to the strong fandom behind him.

After the end of Wanna One’s activities, the members’ future plans began to be announced. And in the midst of fellow members’ solo music debuts or going into acting, Kang Daniel’s next step may be very concerning for him. 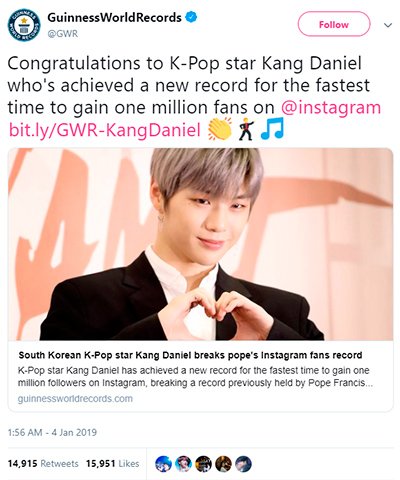 First of all, he made an official personal Instagram account and welcomed 2019. The reaction was explosive. On the afternoon of the 4th, his followers number was at 1.4 million, and he got the Guinness World Record for the fastest time to gain 1 million followers in 11 hours and 36 minutes, beating the previous record of 12 hours held by Pope Francis. Currently, he only has five posts on his Instagram account, but the desire to see Kang Daniel’s presence after Wanna One’s activity ended is quite natural for the fans. (Note: This article was written last week. Daniel now has 1.9M followers and 13 posts as of today)

The agency is also being careful. It appears the next activity has not been firmly decided yet. An MMO Entertainment rep told StarNews, “Kang Daniel will first rest for a bit. We will have to discuss with him regarding his future activities after that.” (T/N: I’m sure the rep can’t give away any secrets. There is no way he doesn’t already have plans). The rep continued by saying, “He will be focusing on the upcoming Wanna One concerts at Gocheok Sky Dome from January 24th to 27th”. 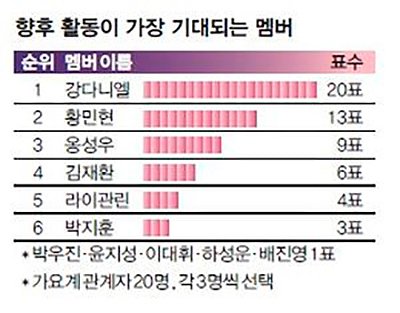 [2019.01.11] Meanwhile, it was also revealed that Kang Daniel has been receiving many love calls from domestic and overseas markets. Voted unanimously by 20 music industry officials as the most anticipated Wanna One member for 2019, noting his strong fandom as one of the reasons he is expected to do well in any activity he chooses to do. An official said, “Even if he is working as a solo artist, he will maintain his unwavering popularity and continue to rise.”[s] 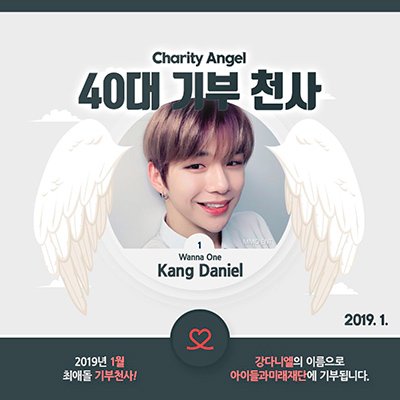 In other news, Kang Daniel is the first Charity Angel of 2019. Voted through Gaon’s Kpop Star app, Daniel has been 1st place for 17 consecutive months as both Charity Angel and Charity Fairy, winning 34 times in total with an accumulated contribution of 17 million won that went to the Children’s Future Foundation.[s] Kang Daniel is also the first #1 idol of 2019 on the weekly ranking Best Idol with 35,473 votes, making this his 47th consecutive week at the top.[s]