On August 9, 2019, South Korean telecommunications company KT released the much anticipated television commercial for its special edition of Galaxy Note10 5G called Aura Red with Kang Daniel as its promotional model. Within 24 hours, the commercial, which many fans speculated to be inspired from the Garden of Eden, gained more than 340k views on YouTube and 235k views on Naver TV. The Naver TV video rose to #1 in Naver’s top 100 videos ranking and stayed there for more than 16 hours. The interest is also reflected in the sales of the product itself, as Samsung Galaxy Note 10 5G Aura Red received more than 1000 pre-orders. It was previously announced that from among the people pre-ordering, 50 would win an invitation to the launch party on August 19 where Kang Daniel will be present. 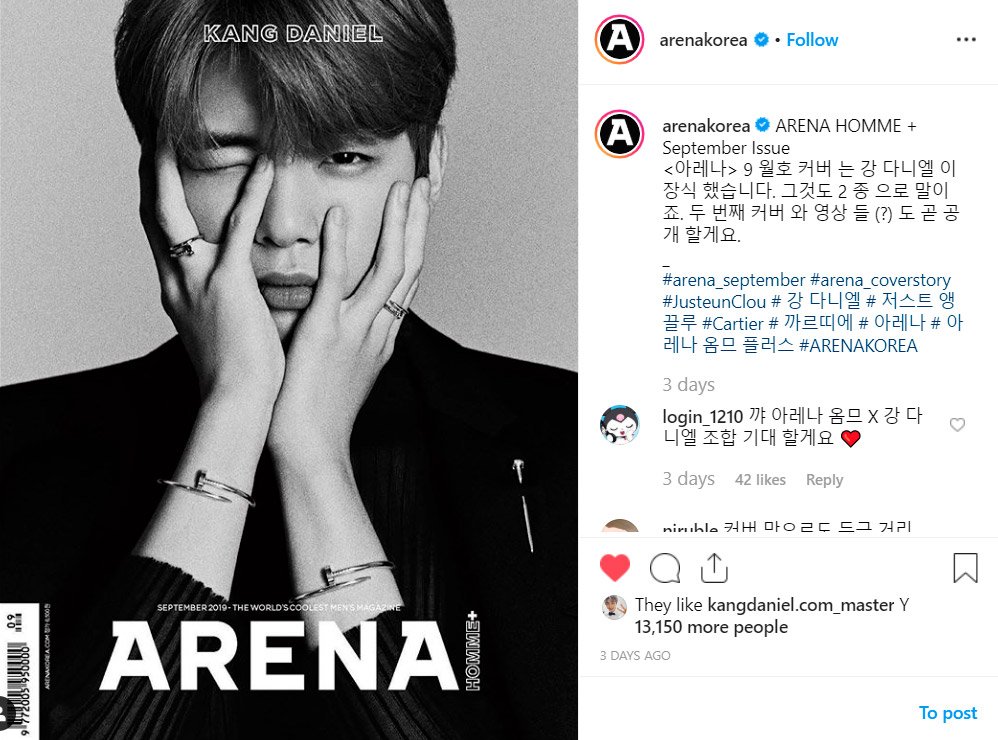 No more than two hours after the release of the Galaxy Note10 5G Aura Red commercial, it was reported that Kang Daniel had recently been chosen as a member of the Maison Cartier friends ambassador group and would be featured in two unique cover versions for the September issue of Arena Homme+ Korea. The magazine unveiled his black and white cover first with the idol showing off elegant Cartier pieces from its Juste un Clou collection. In the fashion magazine world, the September issue is often considered as the most prestigious edition of the year. It marks the start of a new fashion season after months of warm-weather clothes ruling the scene, and fashion publications want to capitalize on their readers’ desire for renewal and transformation at this time of year. Fashion magazines always try to land a cover star who is both enormously popular and representing the image of the magazine for its September issue. Arena Homme+ Korea’s decision to select Kang Daniel to front its September issue has delivered a promising sales result, as the magazine topped all major bookstores in South Korea (Aladin, Yes24, Kyobo, Interpark) one day after the pre-sales started.

The day ended on a high note with Kang Daniel being nominated for KBS Music Bank and ultimately winning his first music show trophy as a soloist with the song “What are you up to”. This victory is even more meaningful, as it gives a sense of justice to him after not being able to promote on any show due to unjust reasons. Fans expressed their happiness by trending #WhatAreYouUpTo1stWin worldwide in fifth place.

Kang Daniel expressed his gratitude towards his fans in a hand-written letter and a video uploaded to his official Twitter account.

“While I was practicing at the agency I heard the happy news, so I came up here right away to film this video. First off, thank you so much everyone. Although I can’t call you by your name yet, I’m choosing a pretty and cool name for you, so I’ll be grateful if you just wait a bit more. Every word of support you’ve given me has been so warm, and your warm words have given me so much energy. In the future I will be the singer Kang Daniel who gives you good performances and music. I won’t become conceited, and I’ll do my best while being more humble. Please keep watching over me. Fighting! Thank you.”