Mnet’s Street Woman Fighter has quickly become one of the hottest shows, doubling ratings with its second episode and topping influential entertainment program rankings from GoodData for 5 weeks to CJ ENM’s Content Power Index (CPI) in the general and entertainment categories for 3 weeks. On the September 24 airing of KBS COOL FM Park Myungsoo’s Radio Show, big data expert Jeon Minki revealed Street Woman Fighter is a huge program with more than 440,000 mentions. The number one related word is Kang Daniel as its MC. In Gallup Korea’s September poll for favorite TV programs, Street Woman Fighter took 19th place. This is the first time since the survey’s inception in 2013 where an Mnet program ranked in the top 20. It also ranked 5th in the October variety show brand reputation rankings.[s] [s] [s] [s] [s] Furthermore, praises for MC Daniel continue even after the premiere.

10Asia columnist Woobin reviewed the second episode in Woobin’s Rhythm Power, attributing 80% of the show’s popularity to the dancers but also saying that MC Kang Daniel is powerful and is more of a guide than a host. Daniel gives the unacquainted public a sense of familiarity and draws them to focus. His dance knowledge and understanding covered for the lack of informational subtitles. Positive reactions are fundamental in battles, and Daniel showed appropriate responses. After recapping why the production team selected Daniel and his dance background, Woobin explained that communication with the dancers is important. The MC needs to have a high understanding of dance and dance battles with the ability to mediate. They should be close to the dance scene while also being well-known to the public. Kang Daniel is the only idol who meets these requirements. He is ready to jump on stage and dance while keeping his composure as the MC. Woobin commended Daniel for playing the role of the audience and filling the void. “Kang Daniel the MC of the battle becomes part of the battle. It’s not too much to assess him as the divine move of Street Woman Fighter.“[s] As a rare decision from Mnet, the MC’s reactions to the 1st and 2nd episodes’ battles have been uploaded separately as extra content.

Additionally, Vogue wrote about Daniel’s value in Street Woman Fighter, saying that he has been dancing for a long time and gently guides the public through battles that may seem unfamiliar. He explains battle terminology calmly and maintains a balance so the rules do not collapse. “He holds the key to the stage so that everyone can enjoy the battle.”[s] Edaily said Daniel is expanding his presence by performing well as an entertainment MC, showing a “good example of growth” as a star from an audition program. Daniel displayed his dance culture knowledge and ability to read the flow of battles and is applauded for his clean, uncluttered progress. His concise and intense remarks and reactions added to the fun of watching battles. The fact that he is an MC who does not try to stand out and helps the dancers, who are the main characters of the program, shine even more is well-received by the viewers. Newsen listed some critiques of the show, including caption editing, but noted that b-boy MC Daniel knew the battle terminology and culture so he played a role in boosting the excitement.[s] [s]

Kang Daniel has also left a good impression on more people involved with the street dance program. In a Flowmaker interview, DJ Som said the MC is important for commentary as the battles are occurring. DJ Som posted on Instagram that he actually could not see everyone’s battles and was fascinated by the actual broadcast and exclaimed, “Kang Daniel who called my name then in such a relaxed manner ㅠㅠ.” The DJ then left a reply on a Naver blog, “Kang Daniel-nim always comes to me and greets me first. He is so kind.”[s] [s] [s] [s] [s]

this is an excerpt from Flowmaker YT where they called DJ Som (the DJ in #SWF)
DJ Som said the MC is important for commentary as the battles are happening, and he said MC Kang Daniel talked to him too, & that niel is very kind and he likes him alot 🥺
pic.twitter.com/S2bFQtoiWz

One unexpected battle between dancers has been happening online… and at the center is Daniel. Hook’s leader Aiki posted a clip on Instagram of her doing a thumbs up move in her battle, which Daniel was shown copying. Always Wetboy Jinbeom, the viral TikTok dancer whom both Daniel and Aiki worked with, then staked his claim on Daniel. From then on, Wetboy and Aiki jokingly bickered over who can say “our” Daniel.[s] [s] [s] 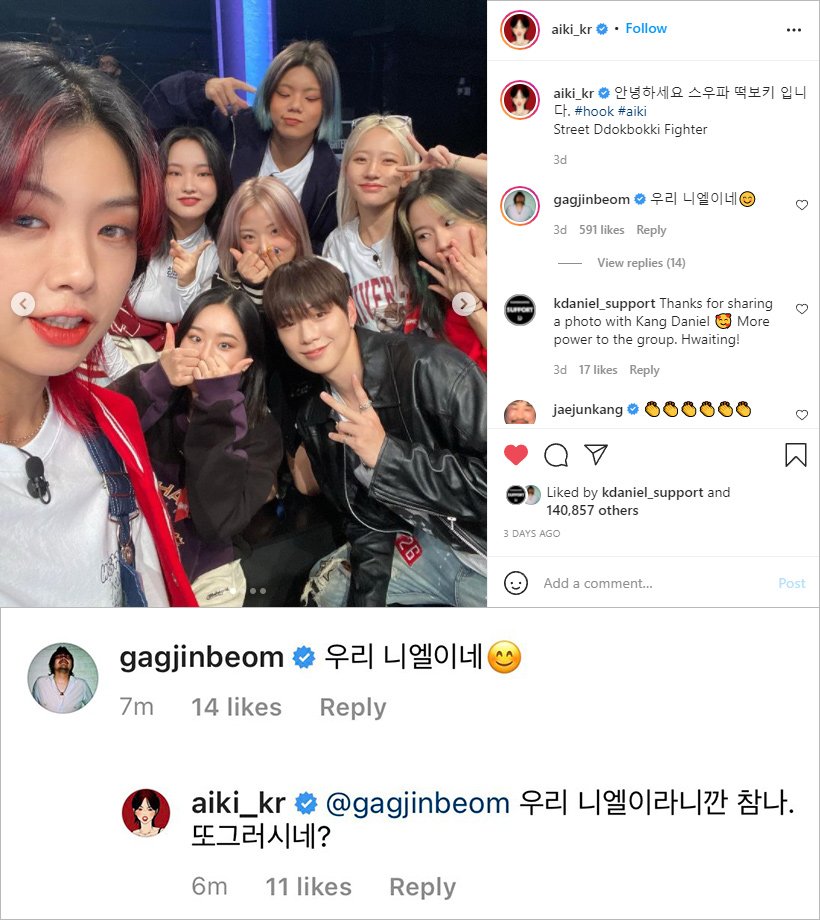 In the DANITY 2nd anniversary V LIVE from August 29, Daniel spoke on his experiences hosting for the first time. Seeing the battles in person was really amazing, and he was thankful. The participants are on another level and beyond expectations. When asked about his position, Daniel replied, “I am the MC. I act as the role of a guide for the participants and those who are watching the show to get comfortable. I am not the participant, everyone. I am not there to shine. I want to enjoy it together with them. As long as I give them strength.” He will not do a special performance because this is a dance survival and he is already there as a fixed MC. The dancers are there to compete and show one more performance, and he will not inconvenience anyone. Daniel said the dancers are really nice people. There may be strong reactions or actions, but those are because they like to dance so much and are serious about it. He is not intimidated, and it’s actually exciting and fun. Those unfamiliar with the scene might think they are fighting a lot. While there may be confrontation, the goal is originally very pure for competition.[s] [s] [s]

“Ah, so that’s why he’s the MC. I was wondering what correlation there was, but now I know!”
“Heol, the pictures in his school uniform are so cute ㅋㅋ But maybe it’s because his legs are so long, but he really looks like a spinning windmill ㅋㅋ”
“He does a lot of fascinating tricks. It’s daebak.”
“I think that since he’s an idol, he doesn’t get full acknowledgement.. If you watch his practice videos, you can really see his dancer days. I don’t have much interest in male idols, but since Kang Daniel’s dancing is fun, I end up watching his.”
“So he really properly did b-boying, and not just tried it a bit. He’s really good.”
“What’s up with the handstand at the end.”
“I was only aware that he did b-boying, but didn’t know he’s so good at it.”
“His core is daebak.”
“No wonder he’s doing a good job emceeing in SWF.”
“Seeing as how the production staff received help from the MC, he was picked well. Maybe it’s because he has street experience, but he knows that atmosphere well.”
“It’s not something I know well, but isn’t it a bit of a disadvantage to be tall in b-boying? Watching Kang Daniel’s videos, it’s great because it’s so refreshing, but it’s also fascinating that he can do that with his long legs.”
“His b-boying is refreshing. Maybe it’s because he’s done battles himself, but there’s something unique about his emceeing. Unlike other shows’ MCs, he enjoys himself and dances along as well. I like that.”

Another hot post was about how Daniel has experience in a mega crew in a way.[s] [s] Netizens commented:

“Isn’t the PD a genius? She chose Kang Daniel who has experience in battle and mega crew to be the MC.”
“Insane ㅋㅋㅋㅋ Kang Daniel has lived and worked hard, much respect to him as an MC.”
“Giga crew ㅋㅋㅋㅋ But Kang Daniel danced well to ‘Nayana’, it’s fun to watch.”
“I seriously respect this because he was the center out of 101 people ㅋㅋㅋ”
“Experience in both b-boy and mega crew, his career is so fitting to be SWF MC.”
“Ahh, that’s why Kang Daniel is the MC.”