In the October 5 episode, MC Kang Daniel’s sweet gestures became trending topics when he was spotted secretly taking care of the dancers during the elimination battle, such as using his cue cards to fan the sweating WANT dancers from behind and opening a water bottle to hand to a crying Gabee. He was also seen shaking hands to cheer on dancers and holding up the ring’s rope to allow Jessi to enter more easily as she performed.[s] [s] [s] [s] [s]

“He really has good sense, but it’s not calculated, it just comes out cutely and naturally? His actions are very natural and comfortable to watch.”
“The MC did exceptionally well today. You can see that he genuinely understands and respects the dancers.”
“He never feels over-exaggerated, just natural and he has many charms. Thanks to him, SWF is more fun and warm.”

Viewers also discussed how Kang Daniel’s emceeing was exactly like hosts of overseas dance battles, noting his reactions to uttering “back off” and spinning a water bottle to pick which side dances first.[s] [s]

“The PD team is good at picking the MC. What would it be like if the MC doesn’t know the English [terms] and battle culture?”
“I saw this video yesterday because the YouTube algorithm recommended it, and I was surprised because the response was the same.”
“‘Oh-ho!’ I’m so familiar with this sound.”

A week after the show ended, Daniel actually explained through UNIVERSE messages why he hosted battles the way he did:[s]

“You’ll know if you watch the battle clips, but there are times when the battle beat is a bit quiet. If I’m quiet as well, then the atmosphere gets awkward. I know too that since it’s a broadcast, I have to match with the viewers’ preference. But don’t I have to create an environment that allows the participants to be able to do even that bit better? I thought to myself, ‘Wouldn’t the show be more fun like that?’

To be honest DANITY probably are also curious as to why I cheer so much into the mic. The reason why is because when I was joining battles a long time ago, I really liked it when the MC was adding all those cheering sounds. There are also songs that some don’t recognize. And there are people who can’t hear well because it’s loud or they’re nervous. I want to help a bit with that. That’s my explanation.”

“No, but if the MC doesn’t hype and just stands there, what’s the point? Is he a lamppost or something?? Kicking up a fuss about an obvious thing, pfft.”
“Honestly Kang Daniel just did well in a way that fit his role well. If you have an issue with that, then it’s not a problem with Kang Daniel but with the staff that didn’t adjust the audio well ㅋㅋㅋ If you watch, all the dancers are cheering too.”
“He’s cute and did well. And at the latter half, they seemed to have lowered the audio of the MC during the broadcast, so if anything else, it felt empty then.”

After the October 19 episode, viewers had a good laugh over how Daniel looked like a puppy fenced in by the fight ring’s ropes.[s] On the other hand, the episode was met with criticism due to an elimination. One of the eliminated crew members is YGX’s Kim Yeri or Yell, who is an esteemed b-girl and also hard of hearing. Netizens expressed their disappointment in how her breaking was overlooked throughout the show and how Mnet’s setup did not allow for her to perform at her best. During Yell’s final 1:1 battle, Daniel was observed assisting by bringing up the song title naturally at the start, singing aloud parts of the song, and bringing attention to her dancing by naming breaking moves like tap mill (which was not aired on broadcast but heard in the full cam).[s] [s] [s]

Following her elimination, Yell posted on Instagram her gratitude for the experience. At the very end, she thanked Daniel with: “I would like to convey my infinite thanks to MC Daniel-nim, the program’s only b-boy, for his thoughtfulness..”
Daniel liked the post and left a comment:

Kang Daniel: ⭐️YELL⭐️
Yell: King of consideration, best MC. Thank you for everything

Yell left a heartwarming message to Daniel on Instagram after the finale:[s]

Pic with the best MC in Street Woman Fighter 👉🏻 @daniel.k.here
I finally got to meet you, whom I’ve always wanted to meet, at nowhere other than a dance contest program..! It was an honor for me to meet you too ✨
Thanks to your reactions and comments that came from your own experience, I felt as if I were in a real street battle scene and I was able to dance battle during the broadcast without much difference! And I am also thankful for all the moments of your consideration to the contestants during filming ☺️
If a day comes when I can meet you as a dancer, not as an MC, and dance together.. I will look forward to it 🌟

MC Daniel helps her by:
– sings the song title & hums bc he knows she couldn’t hear as much
– hypes her up & continues to explain her moves

[added this in for the request] pic.twitter.com/oz2zJMAJRa

After the October 24 finale, Daniel became a trending topic of discussion for several reasons. One of which was a coincidental throwback to HolyBang’s HoneyJ with his 2018 birthday event coffee cup from her neighborhood coffee place.[s] Another hot topic was when people joked that Daniel succeeded with his revenge after four years when he was about to announce the show’s winner, built up the suspense, and then made a callback to Produce 101 by teasing, “It’ll be revealed soon!” before the show cut to commercials.[s] [s]

Clips below were aired during the November 2 broadcast, which included behind the scenes and highlights.

MC Kang Daniel looking so happy taking his revenge on the “first place will be announced in a moment!” and then feeling apologetic immediately from the crowd’s disappointment outburst 😂

Pickon remarked that he was the perfect casting since he was a dancer before becoming a singer and MC. Daniel understands the tension of audition programs having made his debut from one and has a sincerity for dance that extends to the dancers. “While watching the battle stages, he shared the rhythm with the dancers and went beyond the MC duty by shouting and reacting. His reactions became another reason for viewers to watch SWF.”[s]

Newsen reported that it was clear why Daniel was selected as the MC. As a former b-boy, he is experienced with dance battles and familiar with the culture. “He proved his abilities as a street battle host by organizing the scene, expressing [the battle’s] excitement when needed by throwing shoes or giving reactions and highlighting impressive performers. The show’s producers even revealed that he gave them a lot of help during filming.” The journalist commended how Daniel kept his calm during the finale’s live broadcast.[s] [s]

“It is not easy to step down from the spotlight of being the main character and support the dancers by one’s side. It is also a difficult task for someone who isn’t an MC by trade to know where to draw the line and know what is too much or too little. Despite this, Kang Daniel was able to convey the feeling of ‘I’m enjoying the performance’ naturally into the program.
Therefore, many viewers gave praise and applause to not only the dancers but also MC Kang Daniel. Viewers too felt that Kang Daniel was the most suitable person to emcee Street Woman Fighter.”

Other SWF staff, dancers, and audience attendees posted commemorative pictures and videos with Kang Daniel. (Check the full photo gallery at the end of this post!) There were also interactions and messages. The HOOK members started a name request challenge as they competed with Daniel over who was the bigger fan. Daniel saw LACHICA’s Gabee step on the podium to record the finale and offered to record a video for her, which appeared in her vlog. HolyBang’s Lo-A thanked him for his hard work in her SNS update, while fellow member Mull called out to her mom on Instagram story to share her excitement after taking a photo with him. A staff snapped another photo with Daniel and wrote in the caption: “Very humble and handsome Kang Daniel.”[s] [s] [s] [s]

In Daniel’s TMA 2021 interview, he was asked his thoughts on being the show’s MC. He said the crews are the main characters of SWF and that you cannot help but enjoy the charismatic dancers’ control and the showcase in detail of battle culture and music. Through the show, Daniel recalls his street dancer times.[s] [s] [s]

“If you search ‘Kang Daniel B-Boying’ on YouTube, there are several videos but that’s not all there is. There are videos I didn’t film and videos that have disappeared, so that’s a pity. My old memories are flooding thanks to SWF. I’m feeling the excitement and emotions of those times again.”

While Street Woman Fighter has concluded, Kang Daniel will reprise his hosting role for the spin-off with high school girls called Street Dance Girls Fighter to much anticipation. 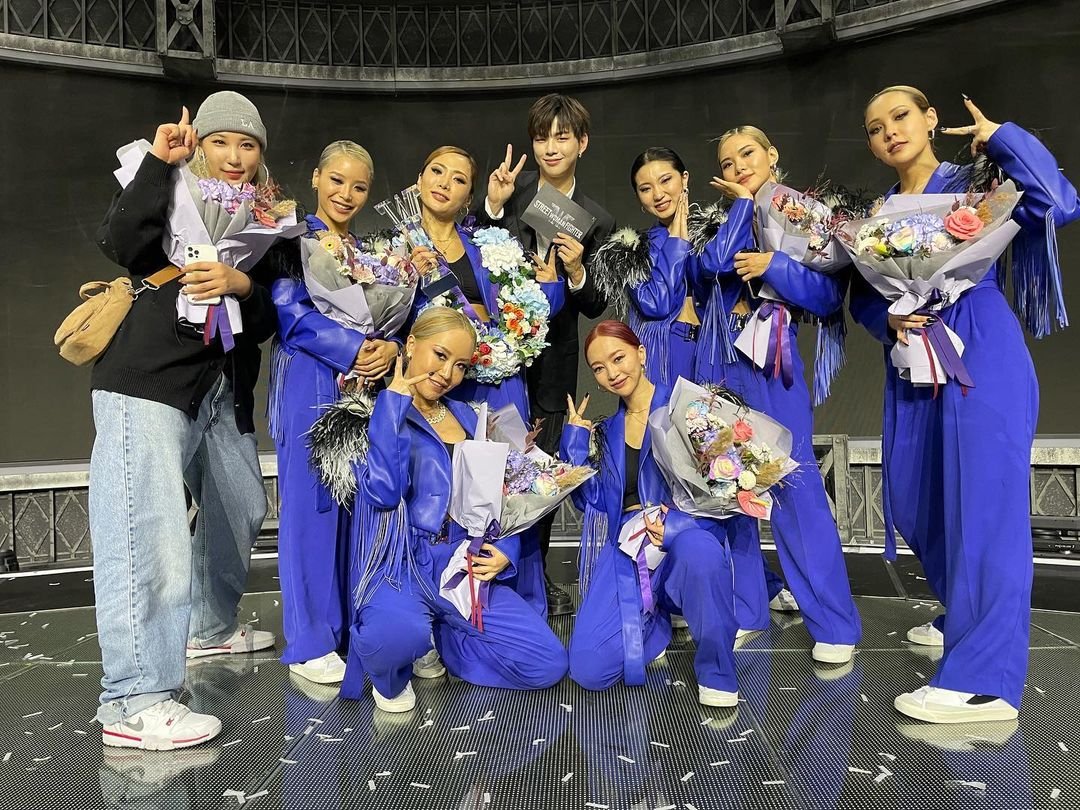 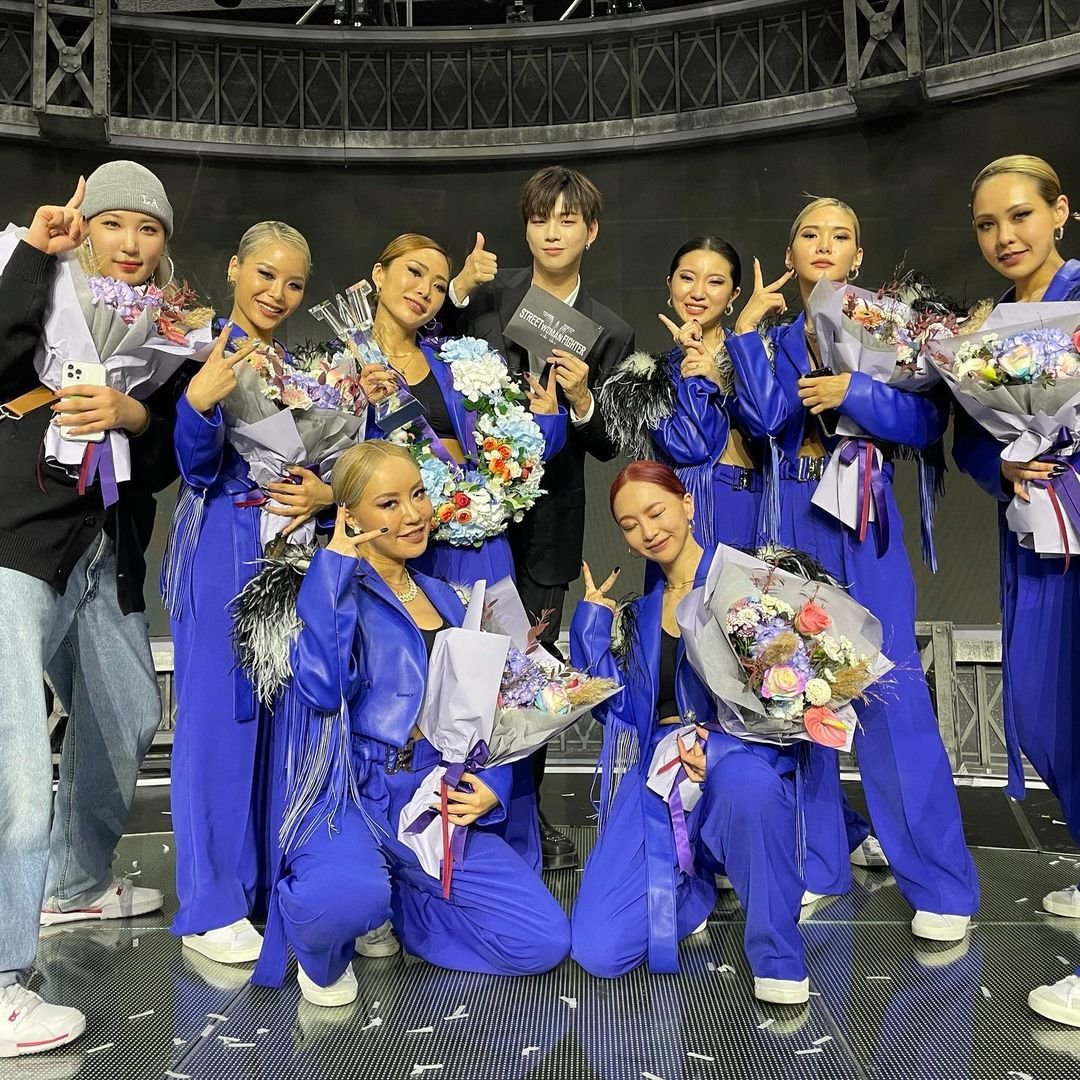 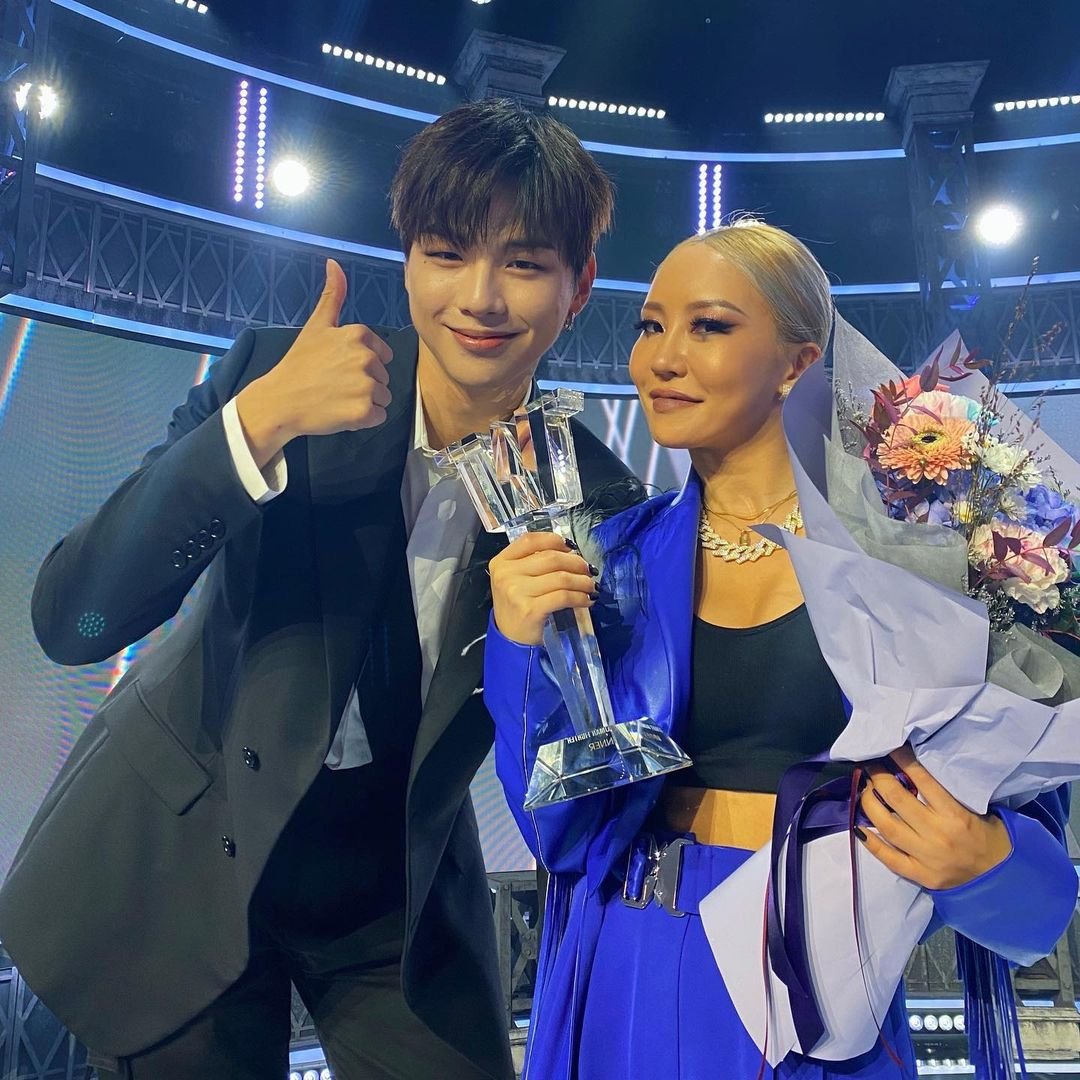 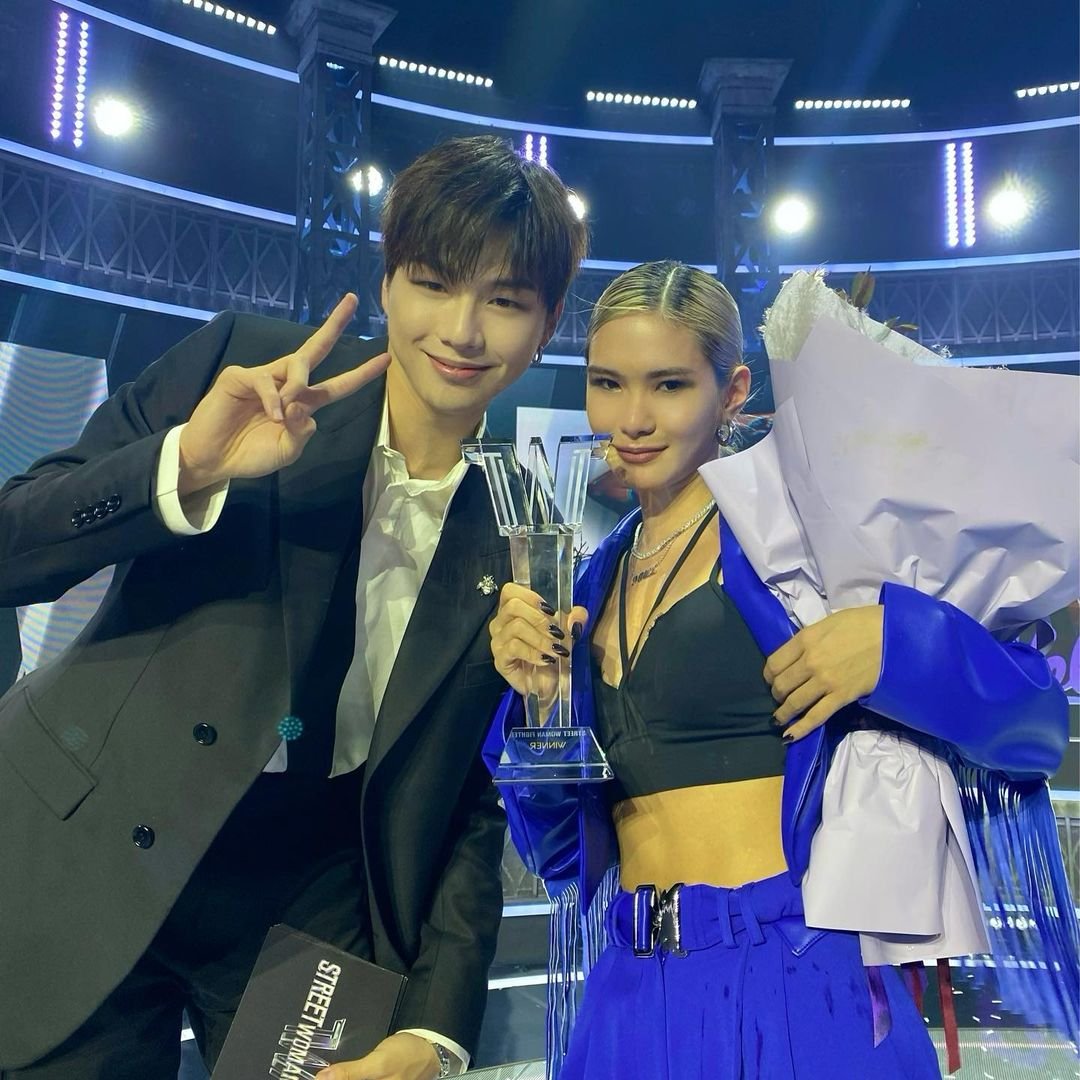 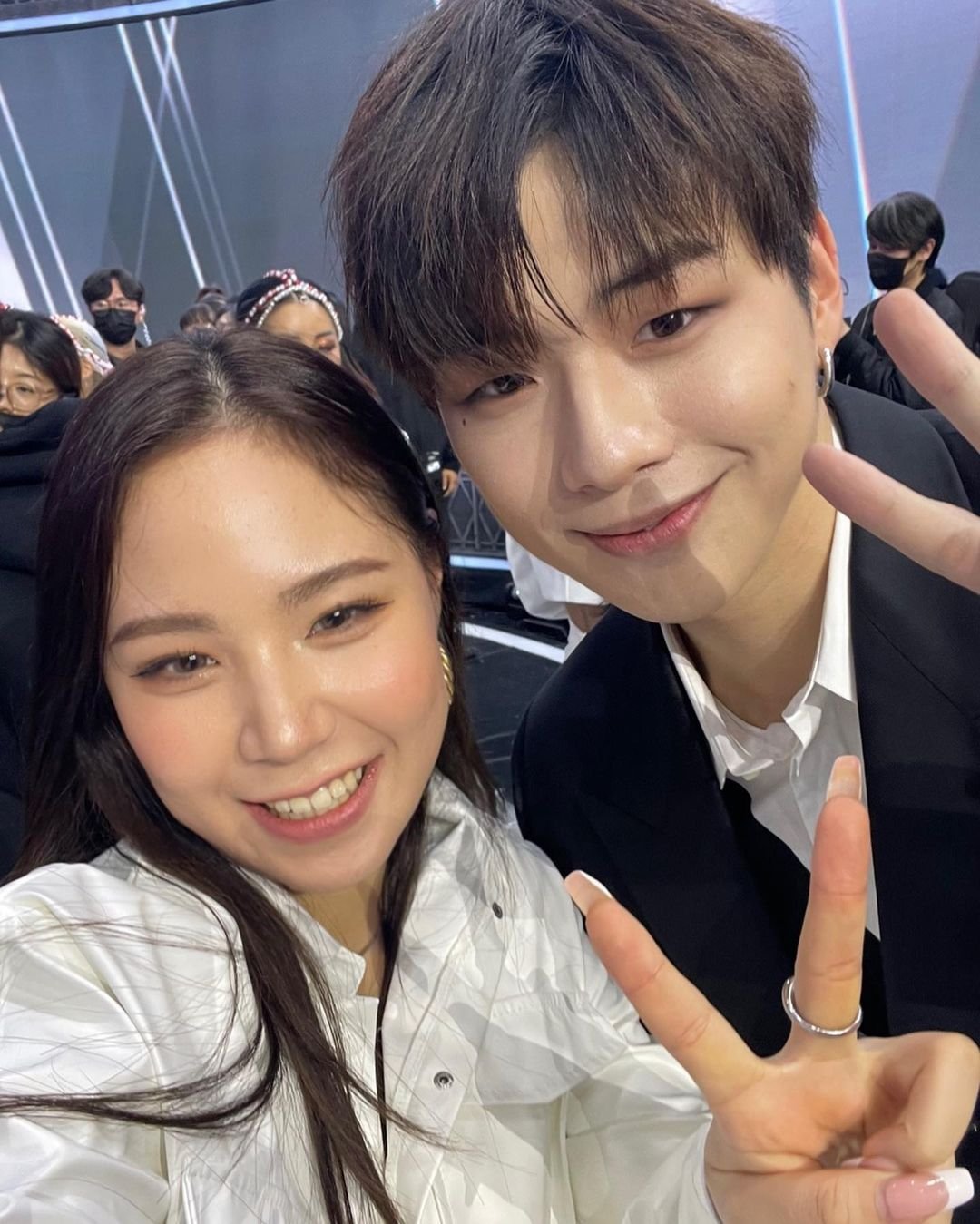 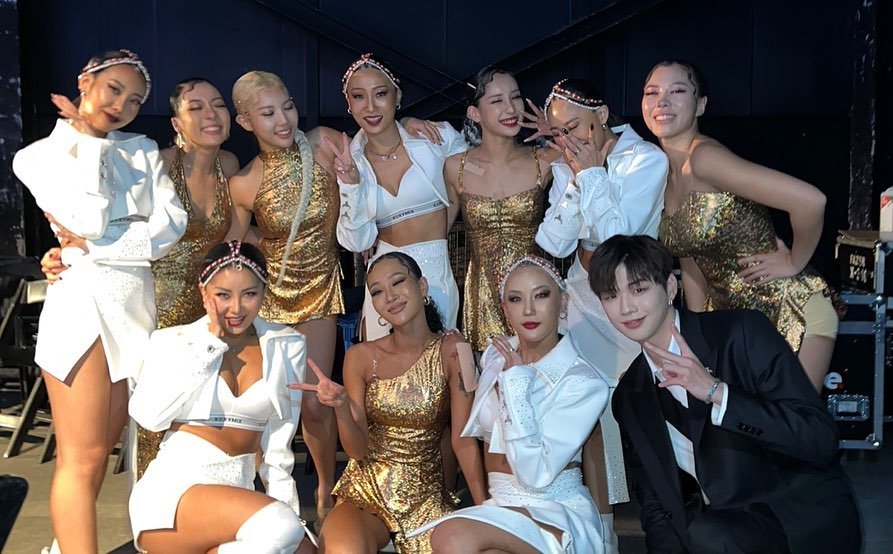 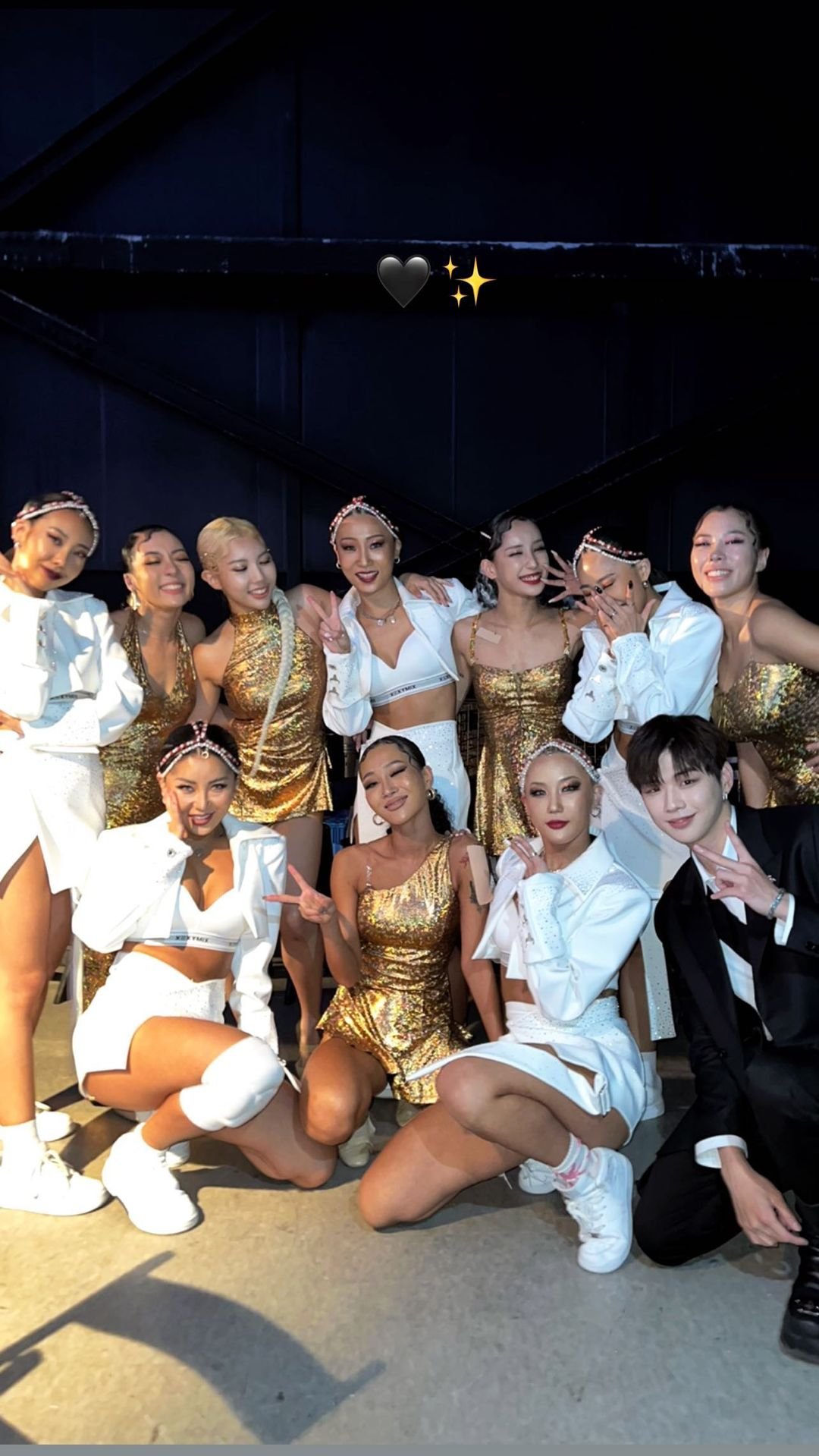 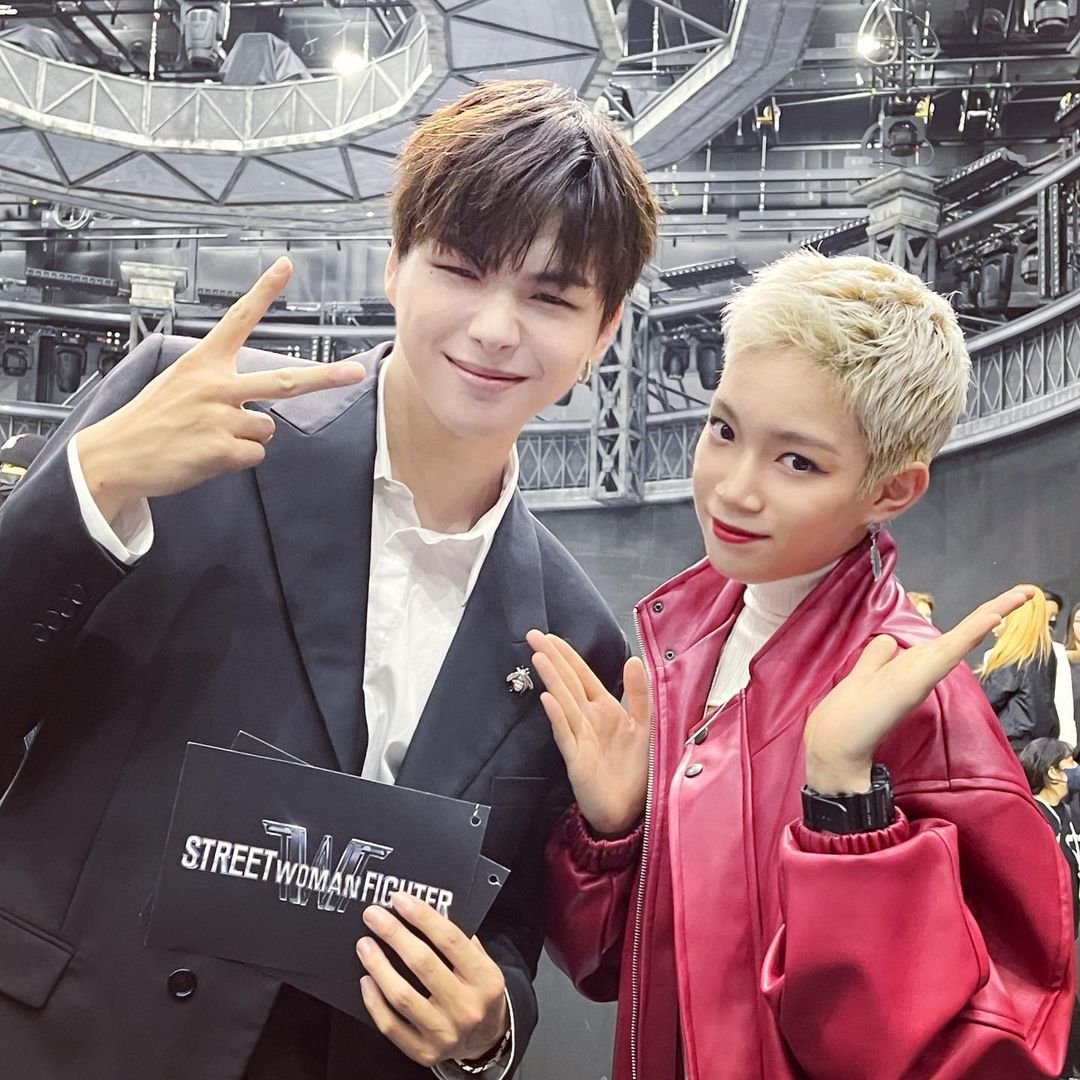 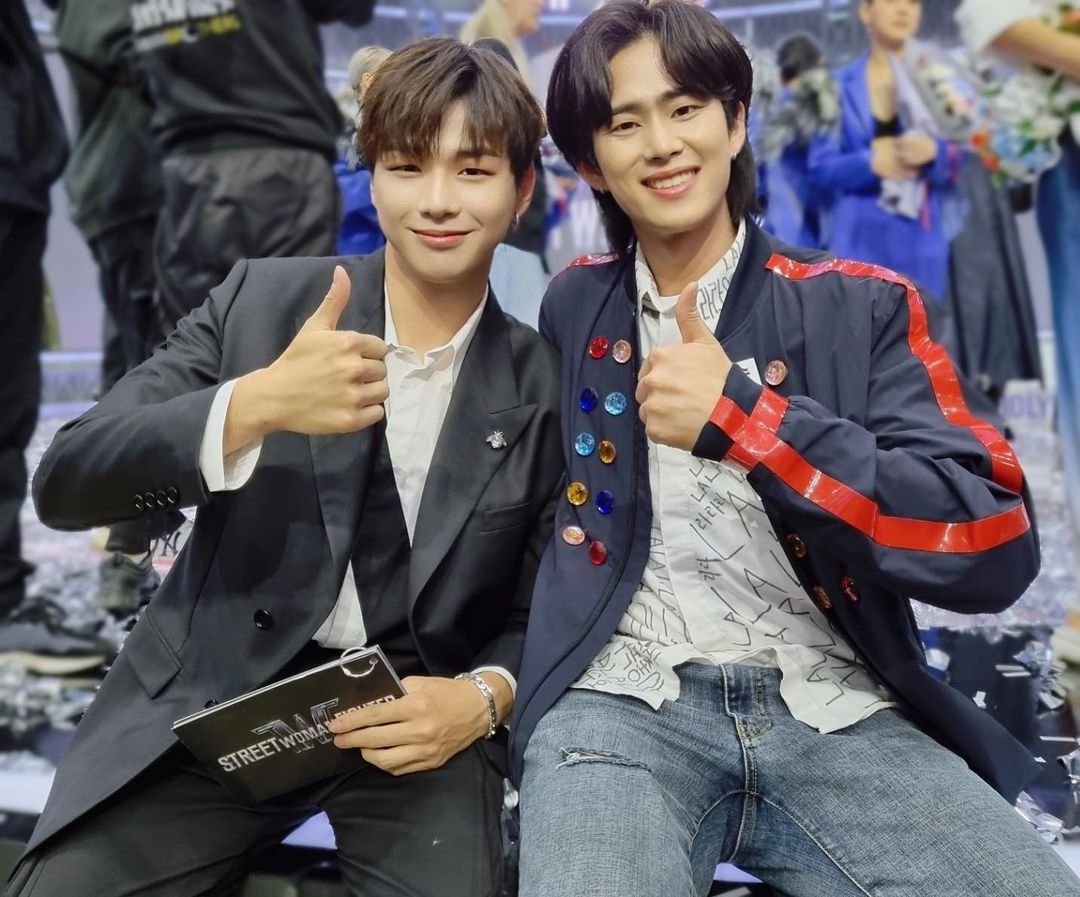 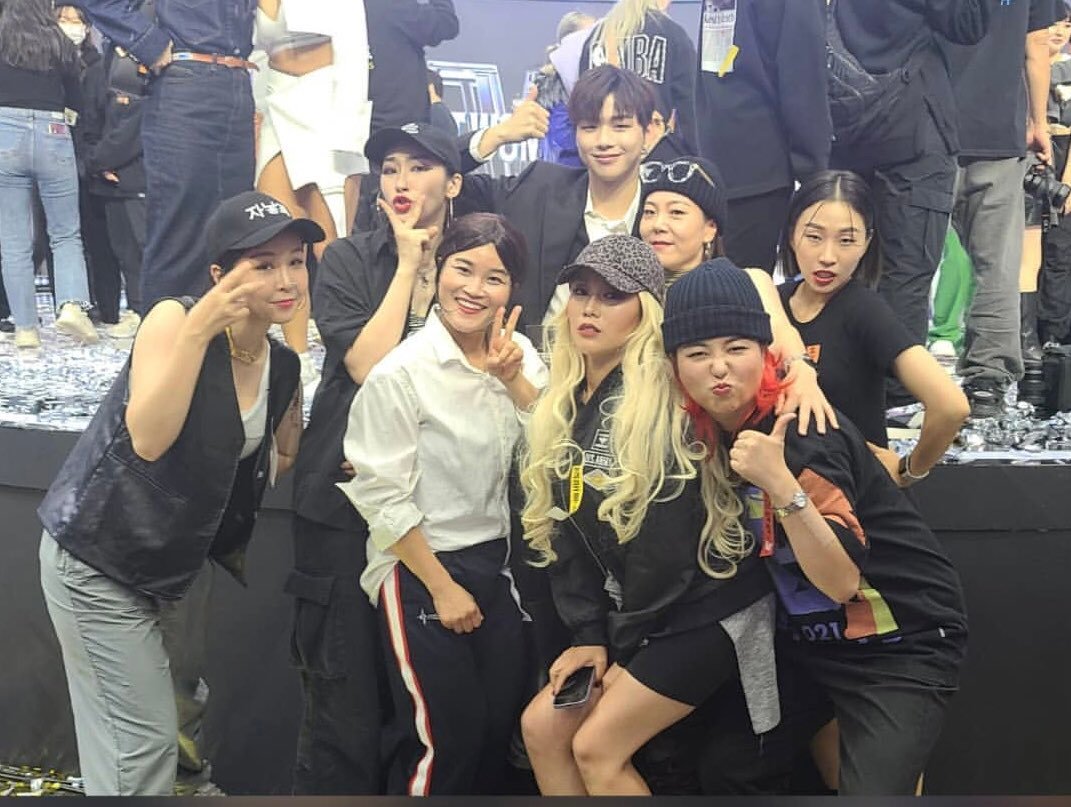 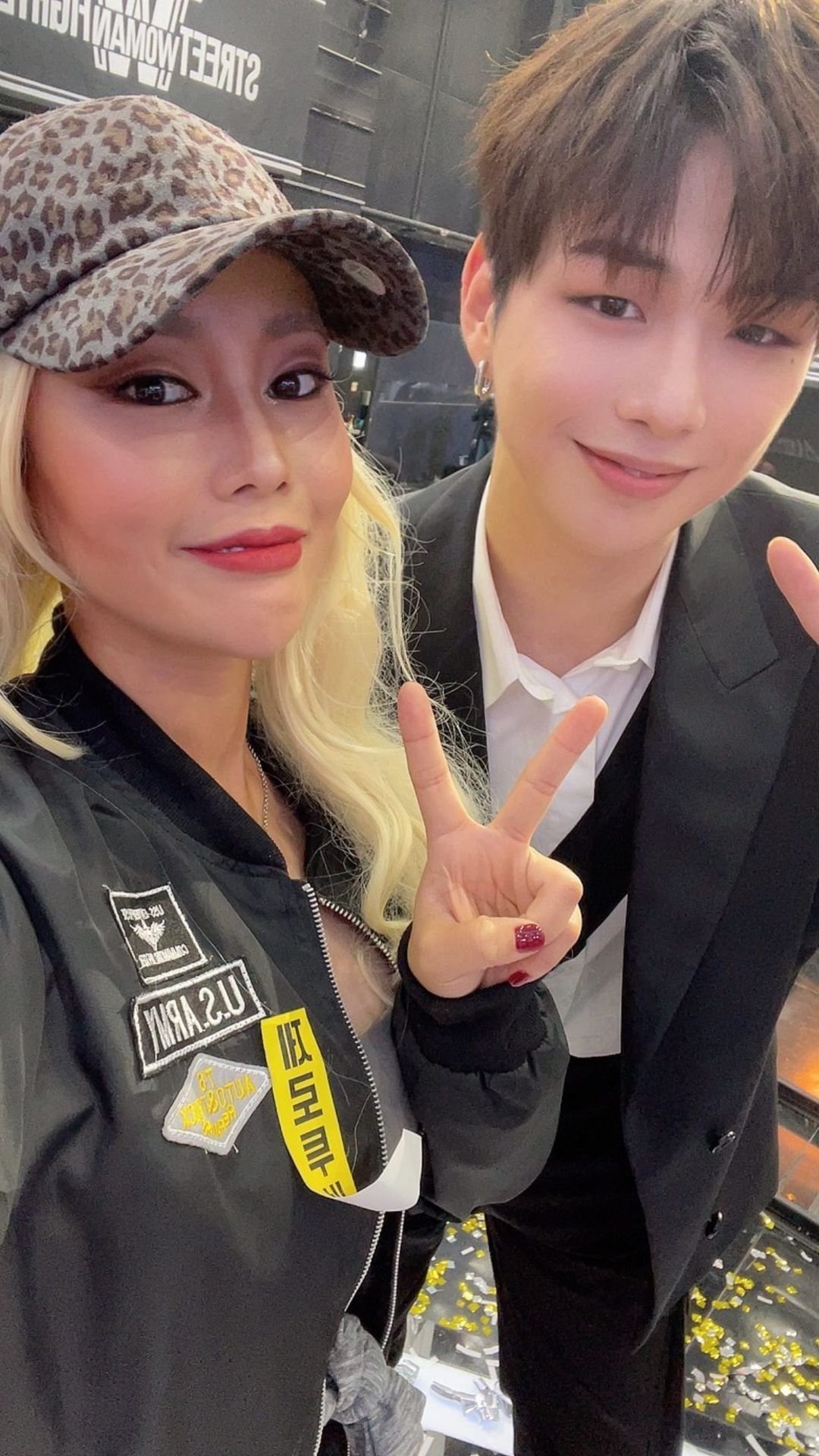 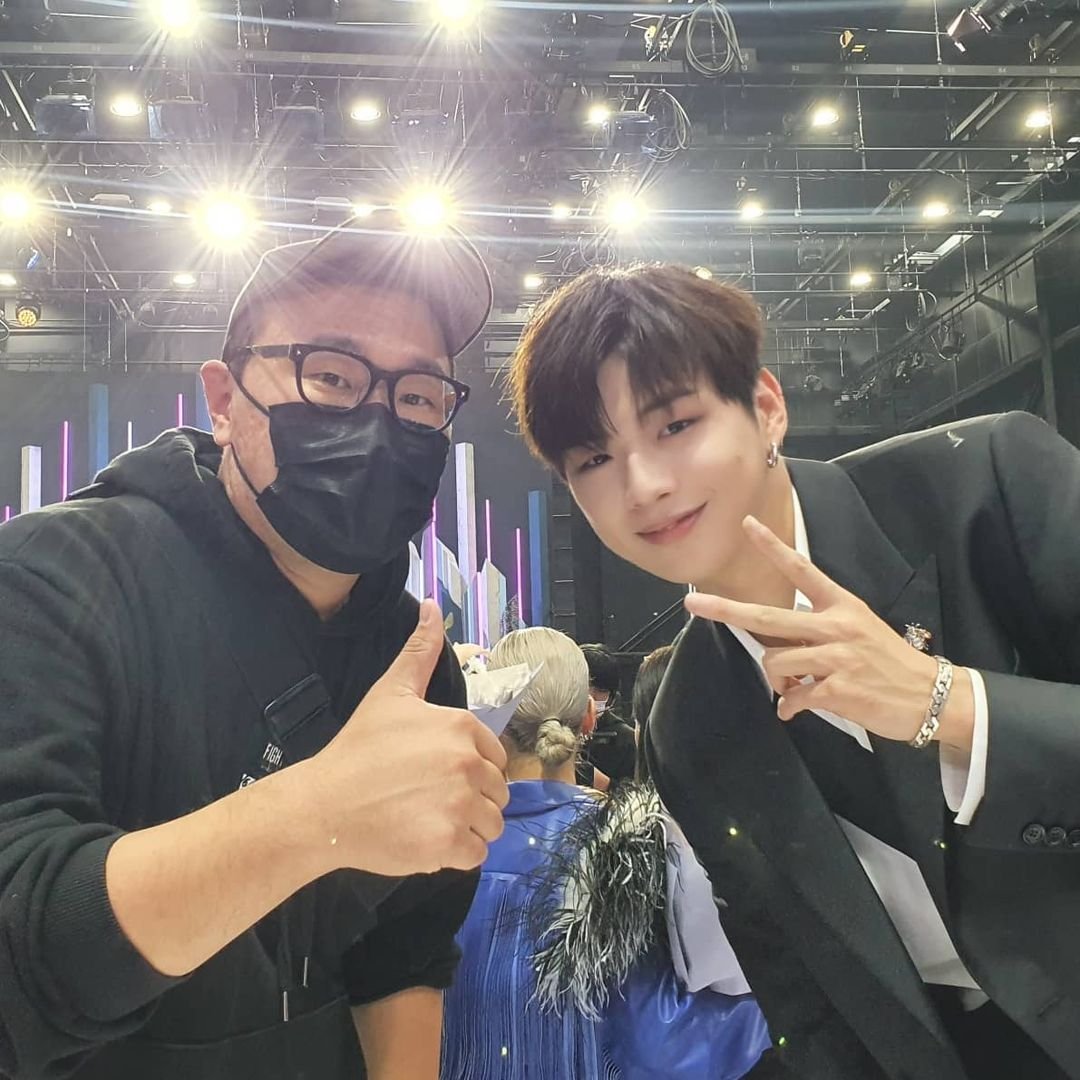 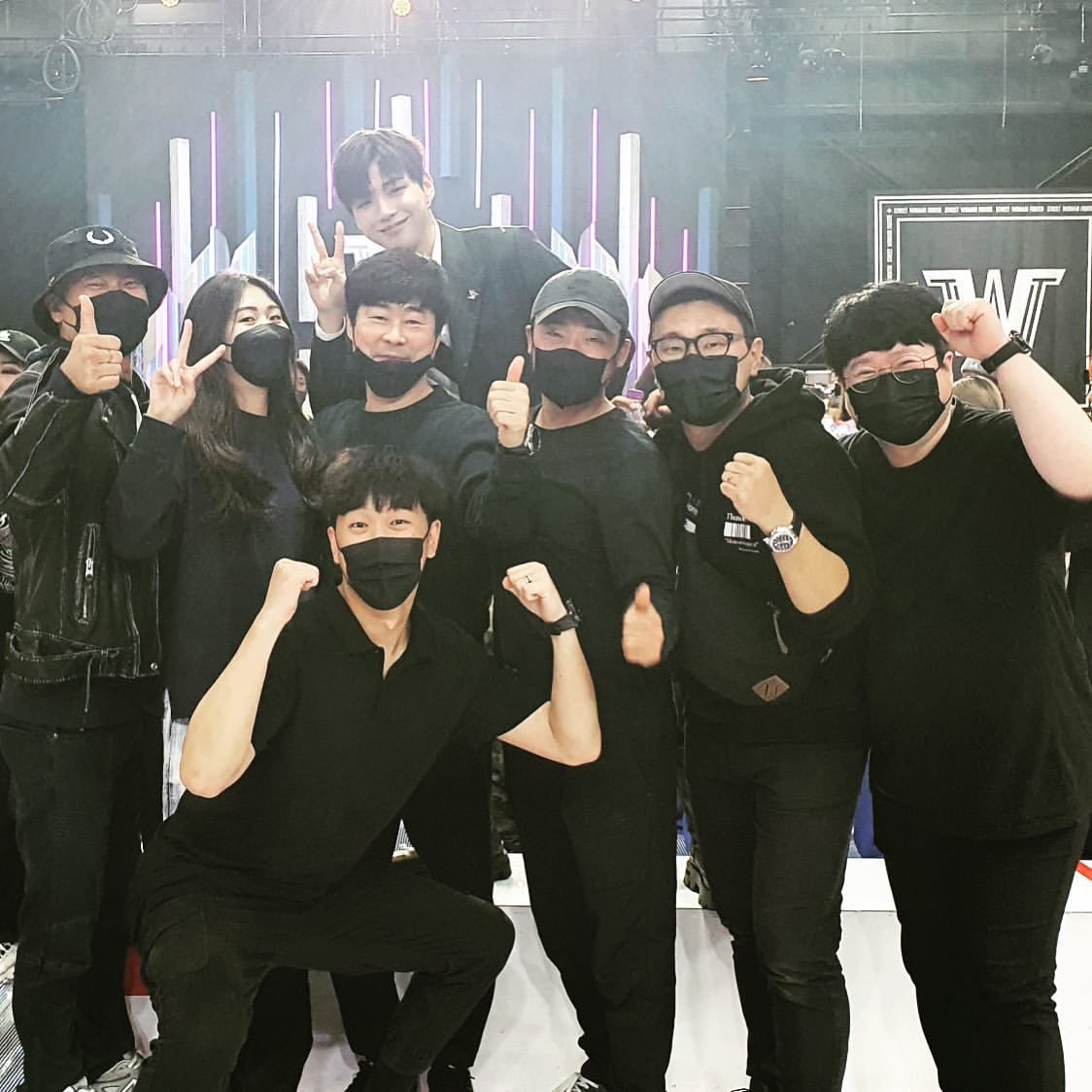 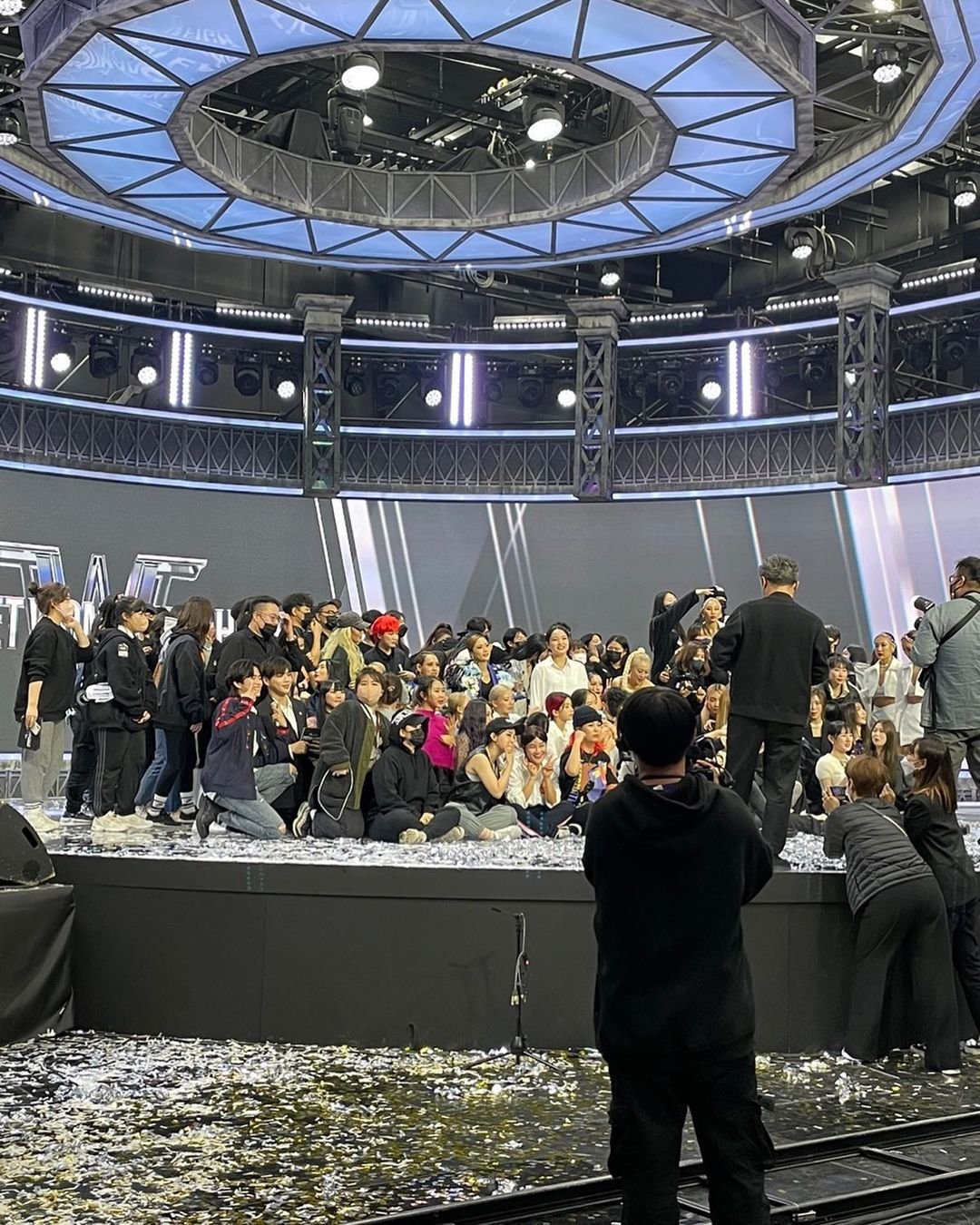